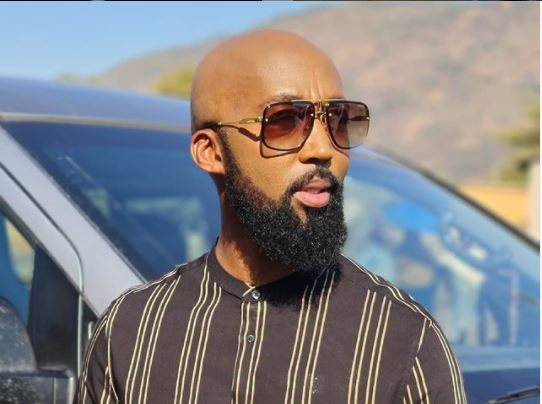 Muvhango actor Dingaan Mokebe (kaKhumalo) has shared some wise words for people who feel their lives seem “stuck”, saying the lack of progress may be caused by the wishes of those close to them.

Taking to his Instagram TV to share his thoughts with followers, the actor warned people that sometimes the greatest form of “witchcraft” was caused by leaving a trail of broken hearts.

“Today, I want to tell y'all something ... As people we like rushing to the conclusion that we are being bewitched when things don't go our way in life. Going around saying things like 'I've been bewitched, that's why my plans never materialise' ... blaming witchcraft for all the wrong in your life. However, I'm here to tell you that you'll be surprised to find that sometimes, your bad karma has nothing to do with being bewitched,” Dingaan said.

Dingaan believes that when a person goes around hurting other people, their unhappiness caused by his or her actions, can result in karma hitting him or her hard. He added that sometimes the people in your circle pray for your downfall, from partners to one's own parents.

“Sometimes you have to look around you because the red flags are there.

“Some of you, your parents are not happy with you, and you think you are going to succeed? You are taking a fat chance,” he said.

Dingaan often uses social media platforms to speak on real life issues that people go through and spark a debate in his comment section.

The cast of Muvhango, led by Dingaan, recently called out their fans who ask them to remove their masks for photos, reminding them that the pandemic is still alive and well.

The actor criticised the “intolerance” and “selfishness” of fans on a video he posted on IG.

“We do the job that we do and we do it for you people because we know you love us and we love you too. But I feel like somewhere, somehow the level of intolerance and the level of selfishness from our fans is on a high level,” Dingaan said.

He went on to remind them that there is still a pandemic, questioning why fans ask them to remove their masks if this is so. He also noted that fans' faves are human beings with feelings.

“We got this pandemic called Covid-19, or the coronavirus. And with my experience, everywhere I have been going, I have been experiencing fans coming through and first, they don't want to do social distancing and second, they ask me to take off my mask because they want to take pictures. Now I need to understand: Are we being realistic?

Actor Dingaan Mokebe aka James Motsamai and his colleagues will not take off their masks to take selfies with you...
TshisaLIVE
1 year ago

"I used to think we are making strides as a nation but, given the situations we are in now, I am not so sure we have done much since democracy.
TshisaLIVE
1 year ago

"If your in-laws are treating you like nonsense, don't blame them, look at your partner!"
TshisaLIVE
2 years ago