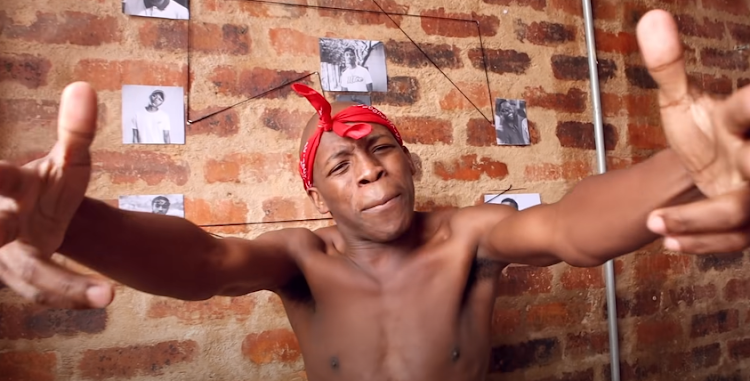 The rising star from the Eastern Cape has come for podcast hosts MacG and Sol Phenduka in his latest release.
Image: YouTube/ Big Xhosa

Up-and-coming rapper Big Xhosa has again ruffled feathers with his latest single, and this time podcasters MacG and Sol Phenduka bore the brunt of his freestyle.

Though he is no stranger to coming for some of the biggest names in the industry, Twitter was left in a mess after Eastern Cape musician released a single coming for his haters and particularly Podcast and Chill hosts MacG and Sol.

In the song released under his other alias SOS, Big Xhosa can be heard rapping about the attention he has received online for his last diss track, coming for some of SA's biggest names in rap such as Cassper Nyovest, Emtee and Nasty C.

The star also used the song to hit back at the controversial Podcast and Chill hosts because MacG and Sol had discussed Big Xhosa on an episode of the show, describing the star's music as “trash”.

Big Xhosa said the pair only speak ill of him, and never celebrate his achievements.

“F*** Macg and his podcast yah for putting me on/B*tch I got myself off so I don't give a sh*t if you're seeing or feeling my song /Who are you? I don't make music for trust fund babies,” said Big Xhosa in his track.

The song took Mzansi by storm. Many were shook by the comments, while others were chuckling up a storm on the TL.

MacG has yet to respond.

However, Sol took to Twitter after catching wind of Big Xhosa mentioning the podcast in his latest release.

“You can diss me all you want my brother. You can't take my joy. God bless you and I love you Big Xhosa,” said Sol.

You can diss me all you want my brother. You can't take my joy. God bless you and I love you Big Xhosa. pic.twitter.com/xchetrLpaL

Check out SA's reactions below:

All SA Rappers came to the game by dissing someone. Emtee dissed HHP. #cassper dissed AKA. Now that Big Xhosa dissed everyone including Shane angle, y'all are jealous coz he can rap better than other SA Hip Hop gents.@SOS_RSA keep doing it bro can't wait for the album👌

Big Xhosa is coming... He's coming with a bang that's sending him straight to the BET Awards and Grammy Awards in the same year!

Big Xhosa is what Ifani was supposed to be! pic.twitter.com/R7f13mRTGE

*when I'm doing good you never mentioned my name*

all of a sudden it's "they came after you coz you had Ifani on, and oh they're actually on Ifani"
So if Big Xhosa never had Ifani on, they'd still be on mute... pic.twitter.com/SdaiwvlbGA

The question is, do you want Big Xhosa or SOS?
TshisaLIVE
1 year ago

"I lost a lot of weight over the past year. I was extremely sick," Zola 7 said.
TshisaLIVE
1 year ago