‘Apparently, forever has a nice ring to it ,’ a happy Liesl shared on her IG 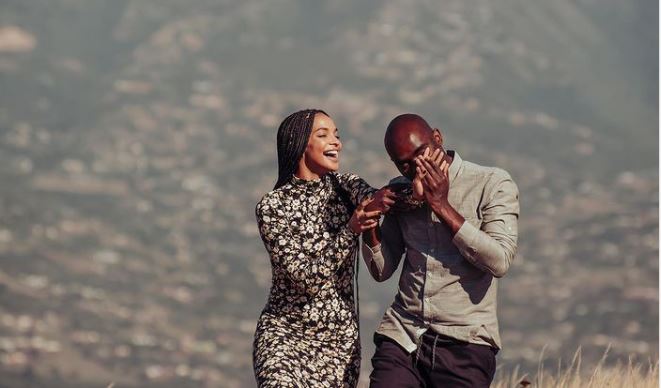 Congratulations are in order for former YoTV presenter and medical doctor Musa Mthombeni, who took to social media to announce that he and his girlfriend, former Miss SA Liesl Laurie, are engaged to be married.

Musa has been dating Liesl for a while and even though he always gushed about “lo sisi” he was dating, neither he nor Liesl made their relationship Instagram official. Musa would be seen on dates or vacation with his then mystery girlfriend but would always hide her face.

After putting a ring on it, Musa decided it was finally time the world met his “Beyoncé” and posted snaps of moments when he popped the big question and put a big rock on Liesl’s finger.

The proposal happened in Durban in a serene setting on top of a KwaZulu-Natal mountain. Musa whisked Liesl off to the coastal city for the weekend. After checking in at The Beverly Hills hotel, the couple later got into a helicopter which took them to a picturesque mountaintop where the big question was popped.

Check out the snaps below:

Not only did the announcement from Musa leave many excited about the “latest ‘IT’ couple” in Mzansi celebville, it also left many applauding him for keeping his love under wraps until he was “ready to make an honest woman out of Liesl”.

The huge rock he put on Liesl’s finger was a highlight for the couple’s fans, who felt Musa took his time to plan things. It was a huge win for Musa as Liesl was also crazy in love with her new jewellery.

“This was the moment that I reminded him that I LOVE my ring and this special proposal so much but I LOVE him even more,” Liesl said.

Musa’s friends flooded the TL with congratulatory messages for the couple who they've known about for a while but respected their wish to remain “under wraps” until Musa could introduce Liesl to the world as his wife-to-be instead of just his girlfriend.

Clement Maosa and Nolwazi Ngubeni wished the couple nothing but the best in their future together and said they were  relieved the “secret” was finally out.

Messages of love and light flooded both Musa and Liesl’s TL as their industry friends and fans celebrated their union. In a world full of constant bad news, their happy news was exactly what many needed to be reminded that love always wins.

"There are at least 50 people being treated. This isn’t a ward. This is an admission area," Musa explained
TshisaLIVE
4 months ago

Liesl is sick and tired of being harassed!
TshisaLIVE
1 year ago

ProVerb wins the romance game with this message to Liesl

If you thought romance was dead, then take a scroll through the timelines of Liesl Laurie and ProVerb. They're one of Mzansi's cutest couples and ...
TshisaLIVE
3 years ago