“Liesl and I are ridiculously excited and happy for this next chapter and our future together,” wrote husband-to-be Musa. 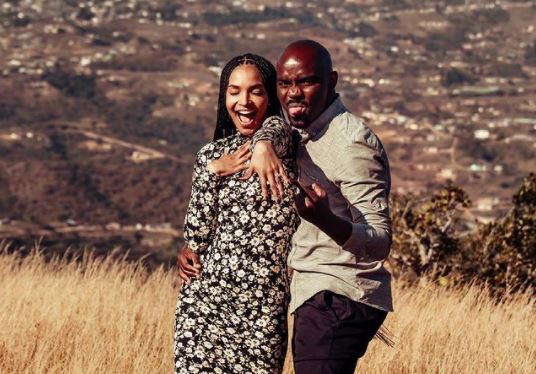 Newly engaged couple, Dr Musa Mthombeni and former Miss SA Liesl Laurie, have taken to their respective social media platforms to express their gratitude for the love, support and well wishes that have flooded their TL since they announced their relationship and engagement.

Musa and Liesl announced that they got engaged at the weekend by sharing stunning pictures of their special moment captured on a picturesque mountaintop in KZN.

Musa has been dating Liesl for a while and even though he always gushed about “lo sisi” he was dating, neither he nor Liesl made their relationship Instagram official. Musa would be seen on dates or on holiday with his then mystery girlfriend but would always hide her face.

After putting a ring on it, Musa decided it was finally time the world met his “Beyoncé” and posted snaps of moments when he popped the big question and put a big rock on Liesl’s finger.

The couple received nothing but love and well wishes from their fans and even those who were heartbroken that both “hotties” are now off the market, expressed their joy at the pair finding their happily ever after in one another.

Musa and Liesl expressed their joy at the love they've been showered with.

“Words can’t describe how grateful we are to each any every person who has taken time out of their busy day to wish us well, repost, reply to a story and even bless us over the past few days.”

The couple also  shared their excitement at the new chapter of their lives that they are starting together.

Liesl and I are ridiculously excited and happy for this next chapter and our future together. God bless you all! To everyone that played a role in making this special moment happen. Thank you!”

Still basking in their newly engaged status, Musa and Liesl have been sharing more snaps from their beautiful “she said yes” moment and Mzansi just can't get enough.

Here are some of their snaps below:

"Apparently, forever has a nice ring to it," a happy Liesl shared on her IG.
TshisaLIVE
3 months ago

"There are at least 50 people being treated. This isn’t a ward. This is an admission area," Musa explained
TshisaLIVE
4 months ago

Liesl is sick and tired of being harassed!
TshisaLIVE
1 year ago