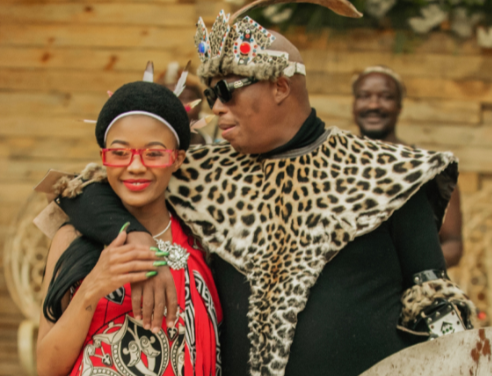 There were fans who enjoyed Babes Wodumo and Mampintsha's reality show while some couldn't stand it.
Image: SUPPLIED

Babes Wodumo and Mampintsha's long-awaited reality show, Uthando Lodumo, finally premiered on Wednesday and it split viewers on Twitter, with some applauding the couple's bravery while others couldn't stand it.

Finally feeling like the stars had aligned for them to give Mzansi a front-row seat into their lives, the controversial couple lay their business bare in the Showmax original reality show.

Talking to TshisaLIVE this week, the couple expressed their excitement at finally having Mzansi get a look at their show, with both stars saying they felt it was about time and the Showmax deal was everything they wanted.

“Honestly it was about time to set the record straight as people always assumed this and that about my relationship with my new husband.

“They were able and willing to meet us halfway and feel that it was a project that would benefit all parties involved. I won't lie, I felt like I was part of everything as my views mattered too,” said Babes.

Mampintsha added, “The deal was worth it. It was a great idea and smart move for us.”

Three reasons why Babes Wodumo and Mampintsha's reality show will be lit!

The reality TV show 'Uthando Lodumo' is scheduled to launch early in 2021.
TshisaLIVE
1 year ago

Their much-anticipated show premiered on Wednesday, and the reactions to their show flooded the TL, making the show trend and indicating that many people tuned in to get a feel of what the reality show has to offer.

Having led very public lives from the get-go, it seems tweeps tuned in to see if they could experience different sides to the stars and a different look at their relationship with each other and with their families.

Others took to Twitter to express how the show gave them exactly what they tuned in for — which is entertainment, humour, behind the scenes information and drama. The fans went on to applaud the couple for their bravery, saying that it couldn't have been easy to let cameras into their private world.

However, for others the show was not enough to make them forget the abuse story that hogged headlines for months. For those few tweeps, it was difficult for them to enjoy the show because they couldn't get past the couple's history.

Here are some of the reactions that topped the TL as Uthando Lodumo trended:

I need more episodes..... I think I have an Indian Love situation with this show 😝😂 #UthandoLodumo pic.twitter.com/7EQqpxFD93

#UthandoLodumo is quiet interesting, i must say Mampintsha and Babes were brave to open the world to their private lives and lead the narrative.

It's such a Good show, I thoroughly enjoyed it - can't wait for more episodes...#UthandoLodumo pic.twitter.com/ltaZ51lc7g

I lost interest in the second episode of #UthandoLodumo … the first episode would make a great case study on dysfunction. Don’t know if I’ll continue watching it

He's abusive... He cheats... And she still agreed to marry him???. Wow... Just wow #UthandoLodumo pic.twitter.com/tGly2Lz2oJ

Please don’t judge me but I’ve been waiting for this 🙈🙈🙈 #UthandoLodumo pic.twitter.com/j6tn2NEmb6

"2021 gave me 2 blessings, marrying the love of my life and giving birth to our baby boy," the 'Wololo' hitmaker said.
TshisaLIVE
10 months ago

Babes Wodumo and Mampintsha have announced the birth of their first child.
TshisaLIVE
11 months ago

It looks like "Uthando Lodumo" will not spare any details on Mampintsha and Babes Wodumo's love and lives!
TshisaLIVE
11 months ago

The ceremony was filmed for the couple's Showmax reality show special Uthando Lodumo, and will be followed by a white wedding in a few months' time.
TshisaLIVE
1 year ago