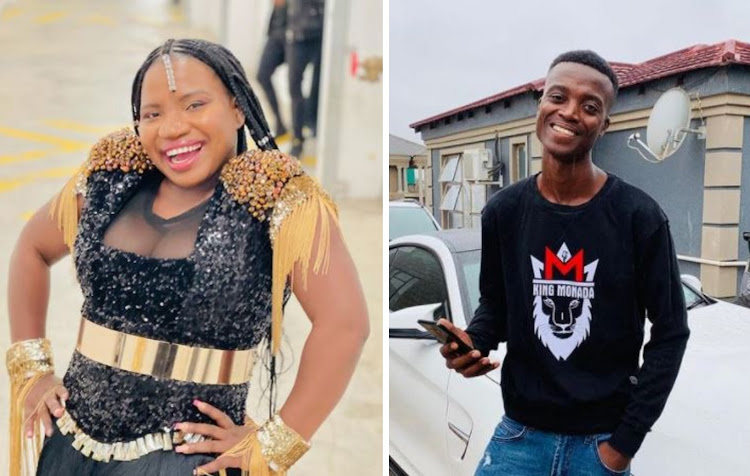 Musician Makhadzi has again raised questions about her relationship with King Monada after excluding the Idibala hitmaker in the newly release single Ghanama.

Though many were hoping for Limpopo's finest to make their province proud, the pair have further confused fans with their latest move regarding the controversial song. .

Yesterday, Makhadzi announced that she would be releasing their song featuring Prince Benza.

However, once the song was released, many were disappointed to find that King Monada's part of the song had been cut from the final edit, and that Makhadzi was promoting the song under the name Ganama.

This led to fans taking to Twitter to express confusion, with many lambasting the song for not being as good as promised.

The stars also topped the trending charts, with fans chiming on the new version of the song. Some felt that it didn't slap without King Monada's verses.

That new King Monada and Makhadzi song is just horrible, I can't believe they were fighting over that nonsense.

The Queen has Spoken.

There are lots of Hit songs coming out with Kokovha The Deluxe. While we wait, let’s have a little fun 🤩 pic.twitter.com/xW6IfMMQNT

The fact that you removed King Monada's voice on the song we won't download it here in Bolobedu. Perform it there in Venda pic.twitter.com/SAFoCF4aEo

I Love Makhadzi Music soo much.. But Ghanama without King Monada is trash.

What Makhadzi and King Monada did with this Ghanama song is like ordering a small size T-shirt only to be delivered a large size t-shirt... pic.twitter.com/TauF1HrJph

Before the song's release, the pair took to Facebook Live in a supposed fight over the rights to the release. However, a few days later they revealed it was a publicity stunt to promote their single.

Taking to Twitter, Makhadzi said, “Tomorrow we are dropping Ghanama’s official audio. Makhadzi and King Monada featuring Prince Benza. I would like to inform everyone that me and Monada, we are fine. We did those live videos for a publicity stunt and it worked for our song to be known before the release,” wrote Makhadzi.

“King Monada confirms that this was a publicity (stunt). We have ensured that both parties clarify that the beef was fake.”

Fans were furious about the publicity stunt.
TshisaLIVE
1 year ago

King Monada thought Makhadzi was "making it up" to him for past failed projects with the song but Makhadzi thought it was a collaboration between the ...
TshisaLIVE
1 year ago

Here’s why 'Limpopo’s finest' King Monada and Makhadzi were trending!