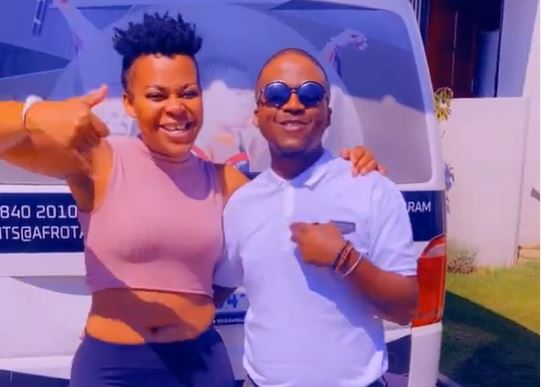 Zodwa Wabantu took to IG to ask Thabo "Smol" to help her out.
Image: Instagram/Zodwa Wabantu

After having spent much of last weekend on the Twitter trends list for her sex escapades, reality TV star Zodwa Wabantu left her fans howling when she took to her Instagram page to “invite” Black Motion's Thabo 'Smol' Mabogwane to her house.

If social media is to be believed the cold front may have pushed people all over SA into making bad decisions. The “I know my worth” squad was full of regrets as they had to feel the wrath of the cold front all by themselves with help only from a heater or hot water bottle.

Zodwa — who has publicly announced that she's single but has people she calls for sex (and body warmth when necessary) — took to her Instagram to ask Thabo to keep her company because of the cold.

Implying that she won't air their dirty laundry if Thabo came through this time around, Zodwa captioned the video “I will never sing again. Thabo woza”, with laughing emojis.

Thabo and Zodwa's “situation” made them the talk of the town all through last week after the entertainer revealed to Lasizwe on a recent episode of Drink Or Tell The Truth  that she has been in bed with Thabo.

As part of the game they play on the show, which can be likened to truth or dare (where the dare is to drink a nasty concoction), the pair ask each other risky questions, expecting truthful replies.

Thabo said “Ke jele, ke jele” (it happened it, happened) and left it at that.

Zodwa Wabantu was arrested for being out after curfew. Crimen injuria charges were also added to the docket.
TshisaLIVE
11 months ago

Zodwa Wabantu alleged that she has had sex with Black Motions' Thabo and also explained why she 'hates' Zahara among other things...
TshisaLIVE
1 year ago

Tweeps loved Thabo's honesty while DJ Warras picked up lessons from the situation.
TshisaLIVE
11 months ago

Zahara slams alleged Zodwa Wabantu ‘beef’: How does that concern me?

Zahara doesn't believe her supposed beef with Zodwa Wabantu is of any concern.
TshisaLIVE
1 year ago