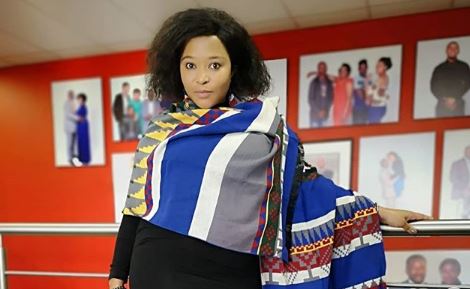 Skeem Saam actress Pebetsi Matlaila was recently candid about going to therapy, saying she has had a positive experience and a moment of self-actualisation.

Taking to Instagram to chat about mental health and her personal journey, the star said her day was blessed after she had a chat with her therapist.

Pebetsi revealed she was shown a whole new world she had never seen before after attending a therapy session, and was thankful to her therapist for taking her on the journey.

“Today was such a blessing. When I went to see my therapist, I was opened up to a world I didn’t know existed,” she said.

The actress went on to talk about how through therapy, she was discovering new things about herself. She said through vulnerability, she has learned to find the power within.

“I discovered new depths about me that I didn’t even know were there. It is when we are vulnerable that we find our power,” she said.

“Tomorrow, I won’t be afraid to admit when I am weak,” she said. 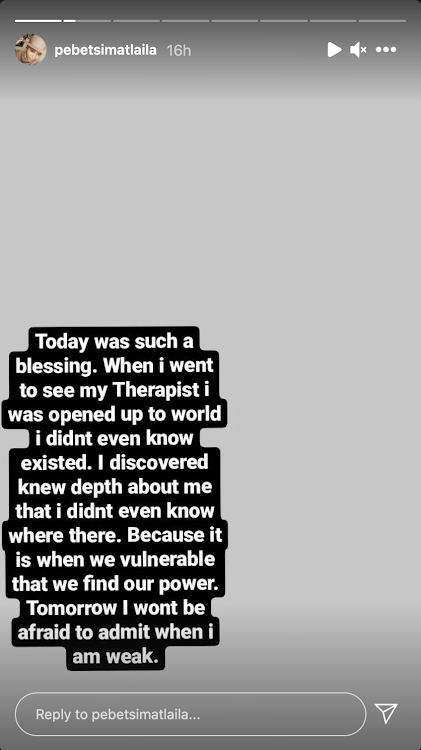 The actress shared some profound moments she had in a therapy session recently.
Image: Instagram/Pebetsi Matlaila

Pebetsi is one of many celebs who have shared their mental health journeys and how therapy has been an uplifting experience. Singer and radio personality Unathi Nkayi opened up about how receiving therapy lifted her out of a dark place.

Unathi detailed some of the times she thought she wouldn’t survive and admitted depression had her at the lowest of lows, where she was unable to get dressed to make an appearance and often used alcohol as a crutch to get by.

“There were times I would rock up in my onesie with slippers on and I’d throw a tracksuit over to seem as if I made an effort, which I clearly couldn’t at my lowest of lows. There were times I would rock up stinking of alcohol from the night before. I am sure I have sat on my therapist’s sofa still drunk from the night before. But through it all I knew I would love the woman I was working on becoming because I knew she deserved to be happy. Which I deeply am today.”

Lifestyle influencer Millicent Mashile has revealed she is expanding her family.
TshisaLIVE
1 month ago

“Why on TV, you look prettier than when I see you now?" asked the guard.
TshisaLIVE
7 months ago

The actress, who plays Lizzy, said she wasn't keen on celebrating her birthday this year, but surviving Covid-19 changed her perspective and forced ...
TshisaLIVE
2 months ago

"So what's with the unnecessary pressure society places us under to snap back right away," Pebetsi hit back.
TshisaLIVE
3 months ago