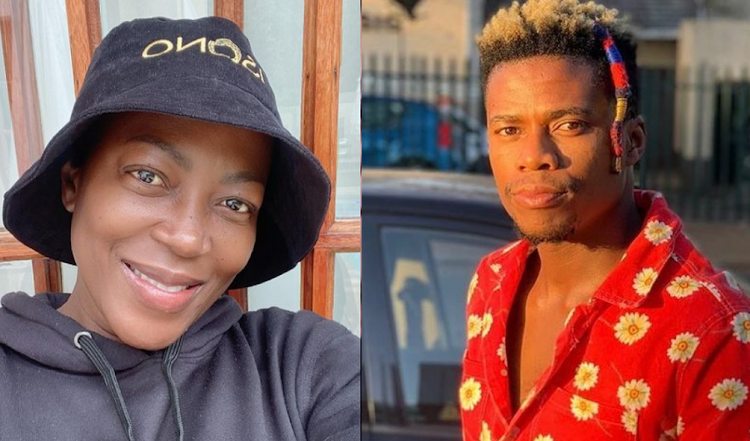 Smash Afrika is grateful to have actress Rami Chuene as his mother-in-law, and says she's played a pivotal role in his daughter's life since her arrival on July 1.

Kefiloe's mother and proud grandmother Rami Chuene was also overjoyed to share the news with her followers as she posted a picture of them together.

Smash revealed she was on set for a shoot in Durban when her granddaughter was born and had to be isolated before meeting the baby.

“She saw baby Kaya through the window and then again when she was done with isolation. She's been such an awesome mother to us, an awesome grandmother to Kaya. They sleep together, they wake up together, she performs for her. It's so beautiful seeing the role she's playing in our lives,” he told TshisaLIVE.

Smash said Rami not only values her time with his granddaughter but has been instrumental in guiding him and his wife as first time parents.

“Kefiloe and I would be nothing without Koko Rami's insight, patience, experience, dedication and love. This is a busy person in the entertainment industry and yet she's always there for Kaya.

“The beauty of grandmother and granddaughter relationships is beautiful. Unfortunately, I didn't get to experience that and I'm seeing that through my daughter and my mother-in-law. We appreciate her on a daily basis.”

Though Smash swears his journey to fatherhood has been beautiful, he admitted it has been "gruelling and tough" at times.

“I want to be present in every way and form there is for my family at large because at the end of the day it's all about the impact of my presence and the role it will play in the future of Kaya's life. I can't wait to experience and create so many memories with our beautiful baby. With the amazing support we have at home, it's been amazing.”

Recalling witnessing the birth of his daughter, Smash said he had a newfound respect for his wife Kefiloe.

“My wife Kefiloe was amazing at delivering the baby. Labour is tough, from the early stage labour, mid-stage, to the late stage where the baby is arriving, it was impressive and she was such a trooper.  I have a newfound respect for Kefiloe and I have so much respect for women who go into labour.  I did cry. It was beautiful.”

“I was present in the delivery room, I cut the umbilical cord and I was the first one to have skin-to-skin contact with the baby. I was very much involved in the entire process and it was amazing.”

They've named their daughter Kaya Masa. Kaya meaning being of Native American and Hopi origin and meaning "my eldest sister", which also translates to a restful place, and Masa meaning "dawn" in Sepedi.

“It was a collective effort. I chose Kaya and Kefiloe chose Masa.”

#CutenessAlert | David Goliath and Davina welcome their bundle of joy

Comedian David Goliath and his wife Davina chat to TshisaLIVE after welcoming their baby girl.
TshisaLIVE
3 months ago

"We are extremely grateful for your safe arrival my LionCub. #blessings" Sibusisiwe Jili captioned a video of the new arrival.
TshisaLIVE
8 months ago