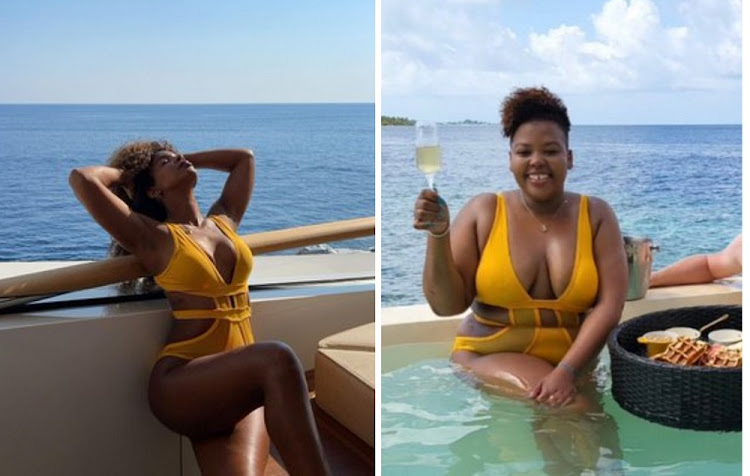 US singer Kelly Rowland made Anele Mdoda trend after she posted a pic of herself in a one-piece costume that looks exactly like Anele's.
Image: Instagram/Kelly Rowland x Instagram/Anele Mdoda

SA media personality Anele Mdoda landed on the Twitter trends list on Thursday, thanks to US singer Kelly Rowland posing and posting snaps where she's wearing the same yellow swimsuit that Anele rocked during her recent Maldives holiday.

Now, it is public knowledge that Anele trends each time Kelly posts a picture of herself, because South Africans always seize the moment to remind Anele how wrong she was about Kelly's beauty.

The radio presenter made headlines in October 2019 when she suggested that the Destiny's Child star was not as good looking as many people believed. Anele added that Kelly only “looks amazing with makeup” and shared a picture of Kelly with and without it. Since then she's had to defend her stance multiple times ...

However, the big issue this time seems to be the question of whether Kelly is “petty” enough to come for Anele specifically. Tweeps found it difficult to believe that it was mere coincidence that Kelly wore the same suit as Anele to pose on a yacht with nothing but the ocean behind her.

Tweeps can't decide if they believe Kelly knows who Anele is and that she'd go as far as wearing the same suit to “troll” her. Others think Kelly knows nothing about Anele and picked out the swimsuit because she liked it and it looks good on her.

As Kelly and Anele made up the top two items on the trends list, an inevitable “who wore it best” competition sprang up ... in addition to all the people trying to connect the imaginary dots between Kelly's true motives and Anele's past comments.

Anele bagged a lifetime L with that Kelly Rowland slander😂.South Africans are dedicated on reminding her everyday. pic.twitter.com/qeEXPNQEWl

Tell me this is photoshopped please 🙆🏿‍♂️, no Kelly is now doing this on purpose. Anele won’t rest shame pic.twitter.com/acp7sutBs4

This is how probably Kelly knows and she is making sure that Anele uyanyiseka😂😂😂😂😂😂 pic.twitter.com/c6zV5NhewS

This has convinced me that Kelly knows EXACTLY what’s going on SA with the Anele drama 😭🤣😂😭😭 https://t.co/dexpxjMAr3

Anele idolizes Kelly's best friend. How did she think she would leave unscathed though? 😭
I mean, Destiny's Child's lyrics were always petty AF. This is CLASSIC: "Wishin' you the best, pray that you are blessed; much success, no stress, & lots of happiness🖕🏾" Yhuu RIP 🥲⚰🪦 pic.twitter.com/AGAbQ9JHS6

She probably just bought that swimsuit because it’s pretty and looks good on her. The only ones who are keeping this going are the South Africans who are constantly in Kelly Rowland’s mentions. I don’t think she’s ever even said Anele’s name

The swimsuit, the setting, and the dates these pictures were posted, make a very compelling argument that Kelly Rowland did this on purpose to make a very loud and clear point. pic.twitter.com/ImRqK9se9W

"I like to trend. Keeps the bills paid," says Anele on her Kelly Rowland past.
TshisaLIVE
10 months ago

It's Anele Mdoda vs Kelly Rowland all over again!
TshisaLIVE
1 year ago

If 2020 made one thing clear, it is that Twitter will never get over what Anele said about Kelly Rowland...
TshisaLIVE
1 year ago