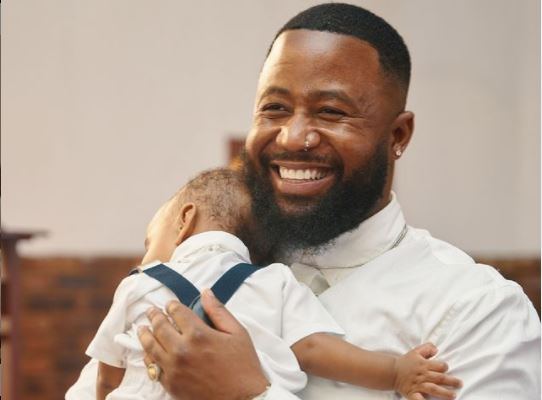 While it may seem like only yesterday when Cassper Nyovest shared a sonogram snap and announced he was about to be a daddy, it’s been a whole year since that moment and Cassper’s son, Khotso, is now a one year old.

Cassper and his baby mama Thobeka Majozi welcomed Baby Khotso into the world last year on September 12. Cassper released an entire album titled Any Minute Nowas an ode to his then unborn son.

The rapper was unfortunately overseas and missed his son’s first birthday party but he found a way to make it special, even from halfway across the world.

The Tito Mboweni rapper paused his performance at a stadium in Manchester, UK and asked the entire audience to help him sing the happy birthday song for his son.

Obviously in his feels, the rapper wrote a heartfelt note for Khotso as the caption.

“Eish, it’s my son's 1st birthday in an hour and I’m in another country making sacrifices for his future. I just hope you know I love you with all my heart, dude. You literally forced me to be a better person. I promise to catch the next one. Love dad,” he said, promising not to miss his next birthday.

Cassper has previously shared how Thobeka makes parenting easy for the couple.

In an interview with Banques and Venom on their YFM show, Cassper said he has so much respect for his baby mama.

“I’ve got so much respect for Thobeka. I'm so so lucky. was blessed with such a real one besides all the bullsh*t of the industry and some of the sh*t hey have to get accustomed to just because of me and my lifestyle and what I do and people being so interested in our family. And also people don’t like seeing people happy,” he gushed.

Drip founder on relationship with Cassper Nyovest and collaboration with BMW

"We stuck to the story of our authenticity, building a township dream, inspiring kids from the Kasi," says Drip founder Lekau Sehoana.
TshisaLIVE
2 months ago

Here's three reasons why 'The Braai Show' is trending.
TshisaLIVE
2 months ago

Cassper has international ‘Fill Up’ dreams: ‘I’m definitely going to sell out The O2 arena’

Cassper Nyovest has a dream to sell out London's The O2 venue which hosts 20,000 people.
TshisaLIVE
2 months ago