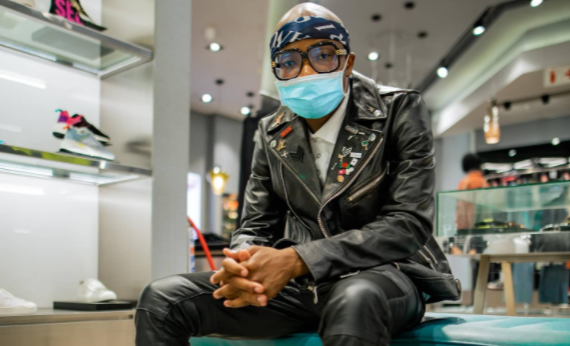 Master KG couldn’t help but flex after his latest trip overseas, hitting those designer brand stores to get himself new threads.

KG has been dominating the world with his hit Jerusalema for more than a year, and recently returned from an international gig with Euros in his pocket.

He went shopping in Sandton and documented it on Twitter.

Among his purchases was a Diesel leather jacket priced at R28,000.

I came back from tour With couple of Euros 💶 And I went straight to Sandton @dieselsa To Get Some Drip..swipe next to see more #WeBACK pic.twitter.com/qaAZDLDs6B

BTW, we see you are a medium, Master KG. So are we, in case you wanna pass along some of the new gear.

This comes from the same dude who dropped more than R1m on his Shine Your Light music video with David Guetta and Akon.

“This year I shot my first, most crazy expensive video Shine Your Light. It cost R1.1m. Never thought it would happen because I’m used to R50k videos But I’m happy,” he wrote.

“It was shot in [the] Dominican Republic. The flights from SA to the accommodation and the production team in those countries are freaking expensive, and other things.”

KG might be celebrating the fact that he is still alive and well after surviving a near-death experience.

The star took to Twitter earlier this month to recount how an engine on his flight from Istanbul, Turkey, to SA caught fire.

“Damn this BS flight. Turkish Airlines left side engine just exploded just after we took off from Instanbul! We had to fly round for four hours so it could lower the fuel level to land back at the airport. For a minute, I thought it was over! God is amazing. Big up to the pilots.” he wrote.

"Look out for me on the biggest American US show, Love & Hip Hop," an excited Nomcebo shared.
TshisaLIVE
2 months ago

"For a minute I thought it was over! God is Amazing. Big up to the pilots."
TshisaLIVE
2 months ago

Do you think it was worth the money?
TshisaLIVE
3 months ago

"We respect each other for sure." - Master KG
TshisaLIVE
3 months ago