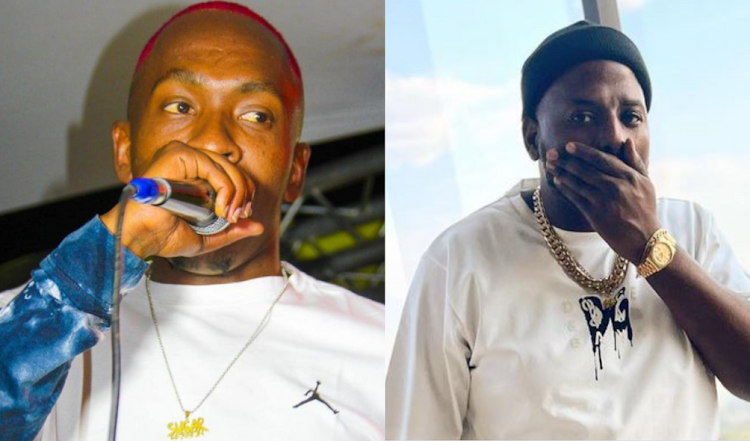 Amapiano star DJ Maphorisa and producer Makwa have been engaging in a scuffle over who is responsible for the success of some of the songs they worked on together.

Things got hectic when the pair hurled insults at each other on their respective Facebook Live videos.

Things started heating up when Makwa took to Facebook LIVE and in response to questions from fans, addressed his fallout with Maphorisa.

“They say Maphorisa made me. Never. That's what I want to know...first time I went to Maphorisa they shunned me using fruity loops few moments later broer has a tattoo of FL studio saying it was inspired by me...Maphorisa claims he gave me Mzonkonko and I ran with it...there's no-one who made me,” he said.

Makwa produced Kwesta's hit single Spirit, while Phori produced Ngud. The similarities between the two hits, have always been a topic in music circles.

“Small boys want to disrespect me...what the f*ck is wrong with you. Makwa is frustrated by the industry and the drugs he's taking.”

“I used to drink lean the time I was depressed and going through some stuff, so he hasn’t left it, I have. Now he's talking sh*t about me... If he were to stop taking [that substance] he'll be fine...I'm in this game to help people,” he wrote.

Taking to his timeline DJ Maphorisa addressed Makwa's claims that he did not copy his format from the Ngud' hit single to do the Spirit song.

“Makwa shut da f*ck up your whole career was made after your copied my wave from Ngud’ by Kwesta and you created Spirit...  Fix yourself n f**ken work hard for your sh*t. Lazy boys all u do is just copy n paste. Start your own sh*t you're disgusting. I hope u stopped drinking lean mxm I'm disappointed,” he wrote.

aint done shit????? but u slept on my couch for three days coping my wave now im nothing Tixo 🙏🏾 Lean is making u think slow

Speaking to TshisaLIVE, Makwa said acknowledged that he and DJ Maphorisa had drank lean together but he had since stopped drinking it and settled for alcohol and cannabis.

“I was drinking lean with Maphorisa back then... I quit six months ago. [About] what he said about me taking drugs, I do not take any drugs he wanted to just taint my name...I just have to put it out there...”

Makwa who says he does not want to have a legacy of someone who “never spoke” up. He maintains that he never meant to ignite conflict with Phori but he wanted to set the record straight that he's a self-made man.

“I was just waiting to buy meat and the fans just came and...I've been keeping quiet for the longest time...this man never made me. The thing that made me upset me the most...he said Kwesta did not make Ngud and he's selecting what he wants to say without saying the whole truth... if I could tell you the stuff that went on in that house which are crazy stories. My album is out, I just want to focus on the music... I released it, Abelungu is the single and, I'm all about Mzonkonko...

“I just I didn't want to speak about Maphorisa until his fans pushed me to.”

TshisaLIVE reached out to DJ Maphorisa for comment but did not reach him at the time of publishing this article.

What 'beef'? Inside Black Coffee's appreciation note to DJ Maphorisa

No, we are not crying . You are...
TshisaLIVE
2 years ago