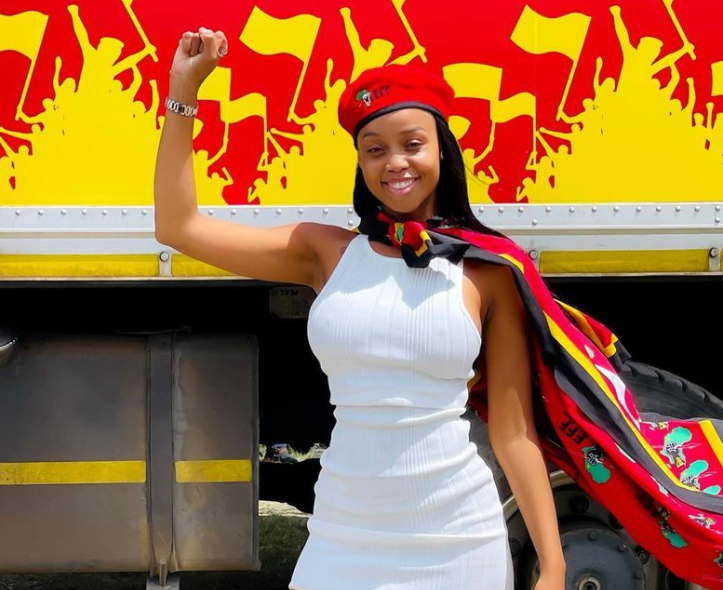 With less than a week to go until the local government elections, several celebs have shown their political colours.

Ghanama hitmaker Makhadzi was shunned by many on the TL for donning an outfit in ANC colours — green, yellow and black — and for her performance at an ANC rally this past weekend.

While her name dominated the trends list, many drew comparisons with actress Ntando Duma.

Ntando has “committed to go all about the country with the EFF to spread the word of #LandAndJobsManje and to encourage all young people to #VoteEFF”.

The actress has previously came under fire for her affiliation with the red berets.

Fans have stood firm behind the two stars to defend them from trolls.

People must stop bullying Makhadzi for exercising her democratic right.

You have Ntando Duma, Alaska, Uncle Vinny and others... pic.twitter.com/fDkuBgjxwD

Leave Ntando Duma and Makhadzi alone. If you want to see them down just go straight to the point. Artists have been dancing and meeting politicians, no 1 said anything. pic.twitter.com/FN1Ku2Sz3I

Someone who compares Ntando Duma situation with EFF to Makhadzi, Shimza and Monada with ANC is a serious domkop. If you are dating such a person you should reconsider your life choices. pic.twitter.com/rHMC5DPa9D

Did we ever complain about Ntando Duma for wearing EFF clothes? So why shld hypocrites complain when Makhadzi wears ANC colours? EFF clowns do not understand democracy bcz all they do is to follow personalities plz educate urselves first abt the right to freedom of association

Ntando has addressed the hate she sometimes gets for supporting the EFF, saying it has got old.

“Your guys’ obsession with me and my affiliation with the EFF is now starting to become extremely weary. To even write an entire paragraph with groundless & unjustified facts. But if this puts bread on your table, then who the hell am I to make you starve. Idla. Ungalambi mntase,” Ntando said.

When Malema joined Ntando, Uncle Vinny and the rest of the EFF "groove vibes" squad to dance, the crowd went wild!
TshisaLIVE
1 month ago

Ntando Duma's blood is red and she ain't afraid to show it.
TshisaLIVE
1 month ago

WATCH | 3 spiciest moments from Ntando Duma’s episode of ‘Drink or Tell The Truth!’