“Each and every day I have to come back and get out of character and leave Nkosana on the set otherwise you’ll hear bad stories.” 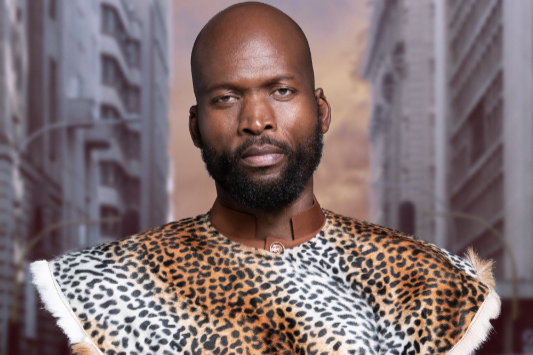 Mondli Makhoba said he had to learn to tap out of character because of the spirits Nkosana invited in.
Image: Mondli Makhoba /Supplied

Actor Mondli Makhoba has bagged his first lead in The Wife which debuted on Wednesday on Showmax.

His name is not new in the industry and he has graced TV screens as different characters. However it's this new character of Nkosana that has seen him tap into other elements that his fans have not seen in him yet.

“I've done different shows, but I've never had a character like Nkosana’s and it’s the first time I'm playing a lead. So SA should expect a lot that they’ve never seen before, I know that they’ve seen my performances in other shows but this one is different and I think Nkosana has pulled me to areas that people have never seen me in.

“I enjoyed those areas those spaces, so they will see more of what they already know and sometimes even new stuff. Because the show is very physical, there are a lot of fights so that way they should just go watch the show on Showmax and witness the magic that we make every day,” the star told TshisaLIVE.

Showmax has commissioned three seasons of 40 episodes each, inspired by Dudu Busani’s books Hlomu the Wife, Zandile the Resolute, and Naledi His Love respectively.

The books follow the lives of the eight Zulu brothers, a formidable crime family, through the eyes of the wives they marry. Its Mondli's first time having to tap into the dark side of a character for a long time.

He said there are similarities with Nkosana’s role because he is the eldest in his family.

“I think that part for me is not hard I just needed to understand who he is and then just get into him as a character then I was fine after that. It’s just that I’m enjoying to play him because I’ve done other shows but this one I think is more challenging because of the character itself and the physical part of it.

“Nkosana is a very angry somebody, he’s a beast, he’s a monster but he leads from behind up until he loses his son. His brother is then shot, then that monster comes back. He's a killer and he is ruthless, that’s the part that is challenging for me because I need to go there and so its hard going in there because then I have to come back. Each and every day I have to come back and get out of character and leave Nkosana on the set otherwise you’ll hear bad stories.”

Mondli is a spiritual person who's aware of the need to detach from character once done.

“It takes a lot because as you are in there mentally and spiritually you invite these energies. Nkosana is ruthless, he's a killer. As much as he loves his families he will do anything to protect his family. Because  I don’t have all of that energy as Mondli, I need to invite those spirits but when I'm done I need to get rid of those spirits as well. So if I don’t, then I’m in trouble because Ill go around with this spirit.”

The Zulu brothers are here! Mzansi excited to finally watch ‘The Wife’

WATCH | First look at Mbalenhle Mavimbela as Hlomu in ‘The Wife’

Joining Bonko to play the rest of the Zulu brothers are Kwenzo Ngcobo as Qhawe; Sipho Ndlovu as Sambulo; Abdul Khoza as Nqoba; Mondli Makhoba as ...
TshisaLIVE
1 month ago