“Growing up, I always saw myself as less than the people that surrounded me I’m not sure if it’s because I scraped through every test I ever wrote, that I couldn’t read or maybe because I was 2 years behind the grade I was meant to be in ...” 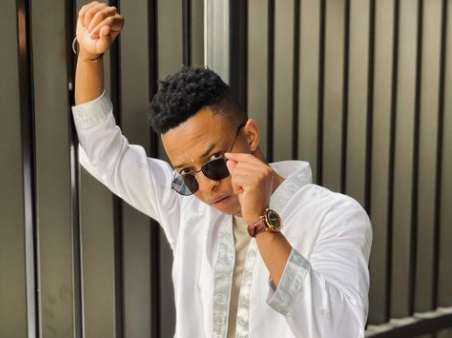 Actor and businessman Oros Mampofu penned a note of encouragement to fans recently reflecting on the growth and success of his career after having outgrown the self-esteem issue that threatened to hold him back as a child.

Oros, who has become a household name since his stint on Skeem Saam, anchoring various television shows and launching a restaurant in Bryanston, opened up about dreading to attend school as a child and how he always felt inferior.

“Growing up, I always saw myself as less than the people that surrounded me. I’m not sure if it’s because I scraped through every test I ever wrote, that I couldn’t read or maybe because I was 2 years behind the grade I was meant to be in, but whatever the reason was, I believed it. I recall that a lot of the time I dreaded being at school and every day was a mountain to climb,” he wrote.

Regardless of the minor setbacks, Oros said he always knew that he would amount to something one day as he was “destined for something special”.

“Looking back I’m grateful for everything, the dark times, the teaching moments and insightful moments that forged me into the man I am today. Into the dreamer that believes anything is possible and won’t be stopped by the likes of adversity.”

Oros said he was still in awe of what he has been able to achieve in the past years and was looking forward to seeing how things pan out for him in future.

“I never imagined I would be a business owner with multiple initiatives on the run like @hotspotgrills, excited to see where I can take them. That for me is still something crazy to think about.

“To dreamers out there! Lets keep going guys. We don’t have all the answers I know, but it’s about getting out there and giving it a try.”

After the launch of his restaurant, Hotspots Grills, in August last year, Oros told TshisaLIVE his past failures had built a resilient spirit within him which has catapulted the success of his career.

“My ambitions make me feel like when I come home, I’m a better family man ... everything was in place for me to pass, but I didn’t a lot of the time ... Failing like that as a young child built resilience. Because of that failure I knew I was going to have to fight with everything I have if I was going to make it in the world.” he said.

Oros is working alongside his girlfriend and baby mama, Bianca Carmichael. They are building a legacy for their two-year-old daughter Aarya and future children.

“I knew I’d be partnering with someone who’d have five times the diligence, work ethic and resilience than any other partner I could’ve worked with. She would know she’s fighting not only for me, not only for her but she’s fighting to leave something for our daughter and the children we’ll have in the future.”

Oros Mampofu launches business with girlfriend Bianca: We’re on a mission to build a dynasty

"I decided to work with my partner because we have a beautiful daughter together and we are on a mission to build a dynasty,"
TshisaLIVE
9 months ago

Oros Mampofu on being 'Ghosted': I've been ghosted and been a ghost too

"But I think people should just speak honestly, instead of ghosting people, especially as adults," Oros shared.
TshisaLIVE
10 months ago

This reality show is all about being "ghosted" - and we can totes relate.
TshisaLIVE
10 months ago

Oros Mampofu: Being a dad has changed everything for me

Oros opens up about fatherhood and his new role.
TshisaLIVE
3 years ago