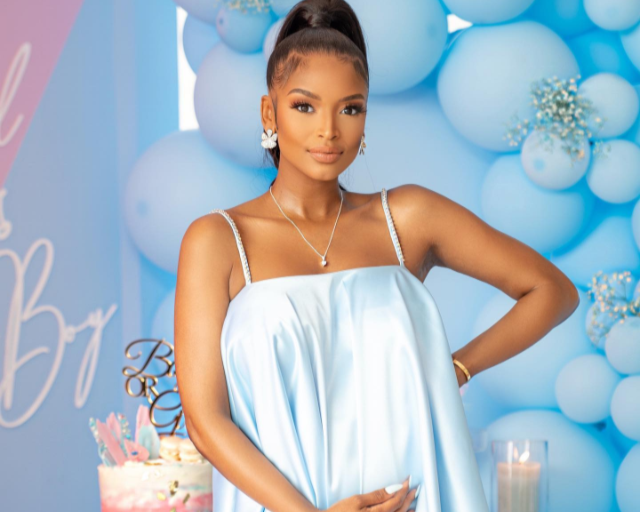 TV presenter Ayanda Thabethe is having a baby boy, and she is totes on cloud nine after she threw a gender reveal soirée.

Taking to Instagram, the model and TV presenter shared her video to give her fans a glimpse into her pregnancy journey.

She was surrounded by her close friends and family on her special day.

Revealing the gender of her baby, Ayanda popped a balloon and the blue confetti flying about suggested the star is having a boy.

The peach and blue themed décor was executed by event planner Precious The Planner, who congratulated the star on her new chapter.

Her fans and celebville were gushing over her news.

A few ago she announced she's going to be joining motherhood in a beautifully captured video.

“More than my heart can hold. Greater than I deserve. Beyond everything I could ask for. An answer to a secret and nervous prayer. Finally, my forever has come,." wrote Ayanda.

She managed to keep her pregnancy under wraps until she made the official announcement on her socials.

It is unclear who her baby daddy is as the model has kept her private life away from prying eyes after previous public relationships.

In her comment sections her fans kept referring her to Mrs K. Only time will tell as the actress opens up her chapter to her fans bit by bit.

Mom-to-be Ayanda Thabethe showed off her baby bump in a stunning video!
TshisaLIVE
6 months ago

"I always want to wash the room with the Holy Spirit and the blood of Jesus," explained the TV presenter.
TshisaLIVE
8 months ago

"No, I have never done a boob job. All genetics and God-given."
TshisaLIVE
9 months ago

Ayanda Thabethe shares her IUD experience: ‘This thing disappeared in my body’

Ayanda Thabethe's experience with the IUD led to her getting surgery to remove the device because it had disappeared in her body.
TshisaLIVE
9 months ago