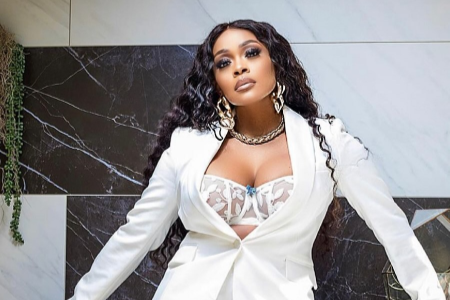 Thembi Seete is overjoyed that she is now part of the judging panel on Idols SA.
Image: Instagram/ Thembi Seete

Actress Thembi Seete feels like she is in dreamland after being named as an Idols SA season 18 judge.

The trio of judges was announced on Wednesday. Somizi is coming back and will be joined by Thembi and JR as judges replacing Randall Abrahams and Unathi Nkayi.

Taking to Instagram the actress said she just couldn't believe she would be in one of Mzansi's most envied chairs.

“It feels like a dream. It's as if someone woke me up and said, 'don't worry, you had a wild imagination'.”

Actress and pop icon Thembi is no stranger to the judge’s chair as she was a guest judge in Idols SA season 17, bringing her bubbly energy and constructive criticism to the contestants, which had social media users singing her praises.

Speaking to Anele Mdoda on 947 the actress sung the praises of her co-judges and said when she got the news she was over the moon.

“I'm excited this is fun, I was invited last year to do the guest judging so I had the best time. So having to be called again to do this for the whole season it is such a blessing ”

“What excited me about working with the two judges JR and Somizi, they both come with different energy.

She was thankful that Somizi will be there to hold her and JR's hands through it all as the oldest surviving Idols judge.

I don’t think you guys understand how excellent of a call JR is as an Idols judge. Mans did wonders in Clash Of The Choirs!

Thembi Seete replaced Unathi on Idols and JR replaced Randal! Somizi is back! I think I’d watch this one

Thembi Seete and JR join Somizi as ‘Idols SA season 18’ judges. I will give this season, as I have the past 17 seasons a miss.

I’m happy for Thembi she must also eat but damn idols has run its course chile 🌚🌚🌚 https://t.co/YzcZtC9BzZ

Somizi opens up about why he chose to stay silent amid abuse allegations.
TshisaLIVE
3 months ago

"Four years ago I was at the point where I thought to myself, I will never act again," said Thembi, before adding how Shona Ferguson came to her ...
TshisaLIVE
8 months ago