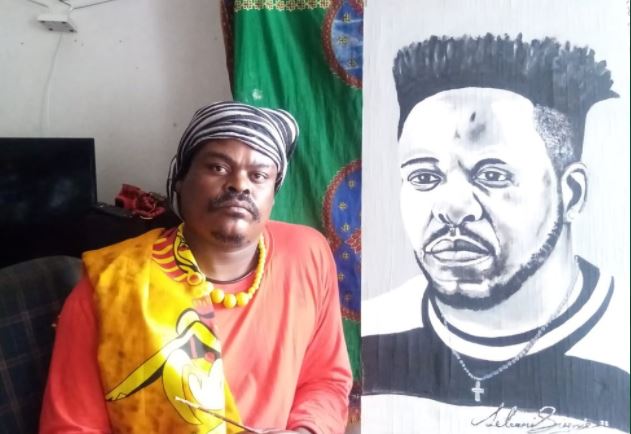 DJ Citi Lytz was shot dead in Soweto on February 14, and was laid to rest in an intimate ceremony at Dlamini Hall in Soweto on Saturday.

Rasta, who was not able to attend the funeral as he was away at DJ Oskido's sister's wedding in North West, shared images of his painting of the late musician and acknowledged his contribution to the entertainment industry.

“I know the guy personally from when I painted the late ProKid. He was there performing with energy. I also saw him at the Hip Hop Awards and he was so full of life. I don't know what went wrong for him but I liked the guy when he was still alive. I would attend to some of his gigs.

“I always honour a late celebrity. People honour them in different ways. For me to paint is showing the way that I am crying with them when I am painting a portrait of the late person,” he told TshisaLIVE.

Rasta is infamous for painting portraits of renowned South Africans at their funerals, and while his paintings often don't resemble the subjects, he had tweeps gushing over how his work has improved.

“Previously people couldn't understand me as an artist who paints people who have passed on. I think my fans are observing and learning to appreciate my art or art as a whole.”

You getting better and better 🔥

I honestly think he is just the face now, there are people doing the work behind the scenes.

Ever since the chicken Licken advert he is getting better

While many might share their mouthful of opinions when it comes to the work Rasta does, the artist said he has grown to ignore the negative comments as he is aware there are many who support his efforts.

“There will always be people loving it and disapproving of things I do but I'm here because of my fans.

“I'm pushing like this because perhaps without them [his two children], I'd probably be someone else. They are the ones who comfort me when people criticise me,” he said.

Artist Lebani Sirenje, who is renowned for painting portraits of prominent South Africans at their funerals, enthralled mourners with two paintings ...
News
7 months ago

Rasta paid his respect to young star Killer Kau, who died in a car accident on August 7.
TshisaLIVE
11 months ago

‘Am I the only one seeing Mmusi Maimaine?’ — Rasta’s depiction of Shona Ferguson agitates fans

Rasta has again upset mourners with a painting of 'The Queen' star Shona Ferguson.
TshisaLIVE
1 year ago

"I might find myself acting one day," says Rasta following his second commercial with Chicken Licken, where SA loved him.
TshisaLIVE
6 months ago