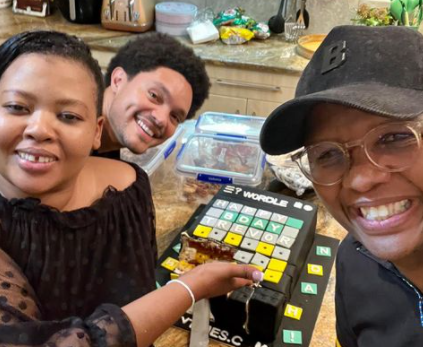 The theme of the comedian's party was the viral video game Wordle, which Trevor has spoken much about expressing his obsession with it.

On an episode of The Daily Show in early January, Trevor revealed he was a big fan of Wordle while speaking of it being the newest internet craze.

“Everyone is playing it ... It’s like the most popular thing ever,” he said.

His cups and cake for the celebration fit the Wordle theme.

Anele's six-year-old son Alakhe also had fun with his “uncles” and got to carry the trophy after their go-kart race experience.

The group of friends also enjoyed some indoor fun activities playing card games, TV games, and dancing the night away.

Take a look at some of the pictures and videos below:

We’re still at it. Khaya & I just had a spectacular crash! Peep. https://t.co/IBO7wWFK04 pic.twitter.com/2wN48XKfav

We did cups for Trevor Noah’s birthday this weekend pic.twitter.com/qcJ2i1P9C1

While not many people have caught wind of Trevor Noah's travels to SA from America, he has recently been visiting the country more often lately.

In early January, his friends shared images of their hotel stay, bowling and poolside experience from their getaway in Cape Town.

The prestigious gig has previously been headlined by comedians such as Michelle Wolf and Stephen Colbert.
TshisaLIVE
5 months ago

Trevor Noah and his pals showed off their slick dance moves on the viral challenge.
TshisaLIVE
7 months ago

"I mean, why did I book a flight? I could have hitched a ride," joked Trevor.
TshisaLIVE
8 months ago