Donald says he's prepared to give a reward to anyone who can come forward with information. 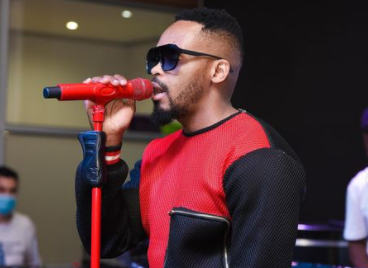 Singer Donald wants his infamous red microphone back and is prepared to offer a reward.
Image: Insagram/ Donald

Donald is on a quest to finding his red microphone after he revealed that it was stolen recently.

The singer took to his Instagram saying he was set to open a case of theft after someone broke into his car and stole the case that contained the item.

In the post, Donald also said that he was willing to offer a reward to anyone who had any information that would help him track down his precious microphone.

“I've got some bad news ... someone broke into my car and took the case that had my red mic, so my microphone has been stolen. I don't know what they going to do with it because you can't really sell that microphone ... I just wanted to ask for your help.

When TshisaLIVE approached Donald for comment regarding the matter he said he had nothing further to add than what he had disclosed on social media.

If you're a big fan of Donald, you'd know that he always performs with his red microphone and he's become infamous for it.

In February 2016, Donald launched his first documentary, a record of his journey in the music industry, called Behind the Red Mic to air on Mzansi Magic, featuring the likes of DJ Zinhle‚ Masechaba Lekalake‚ Dineo Moeketsi and Somizi.

In August 2016,  Donald performed at Carnival City in Johannesburg, recording his first live DVD called The Red Mic Xperience where he had the likes of Somzi (as head of choreography) and performances by NaakMusiQ, Busiswa, Riky Rick and DJ Shimza feature on the DVD.

During an interview with DJ Sabby in 2013 when speaking of launching his first live DVD, Donald explained that after not getting nominated at the South African Music Awards after his biggest year in music, he was inspired to do things differently.

Donald said that he went to buy an expensive microphone, and it was then that he birthed a new chapter.

Donald speaks on his latest music ventures.
TshisaLIVE
8 months ago