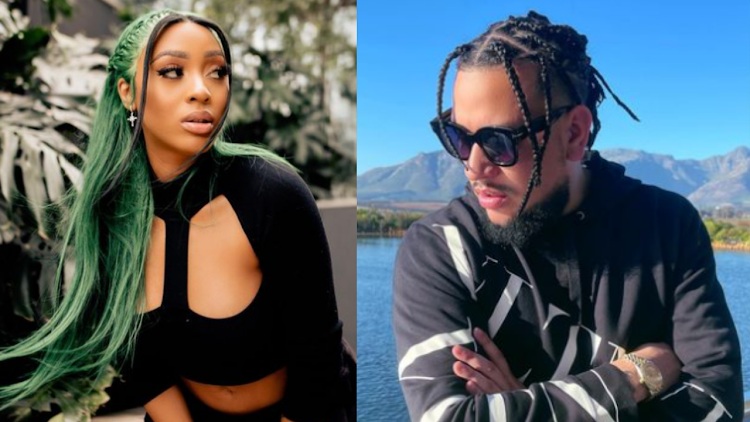 When they came out on the socials as a couple, rappers AKA and Nadia Nakia's announcement was met with mixed reactions from tweeps, but that has not stopped them from loving each other out loud.

The pair seem to be head over heels in love after a recent clip of them shared by entertainment blogger Musa Khawula went viral on social media at the weekend.

In the video AKA and Nadia were getting cosy while AKA was performing, and the pair shared a smooch on stage.

In the comment section some tweeps commended him for loving publicly while others were not impressed by the clip.

“When AKA loves he loves for real,” wrote one tweep.

“That poor girl died last year. Not even a year later he is ranting and raving with someone else. There is seriously something wrong with AKA,” wrote another tweep.

AKA with his girlfriend Nadia Nakai last night. pic.twitter.com/2TulTONAkW

The stars took to Instagram two weeks ago to announce they are dating. They shared a video of them sharing a kiss while at Orthodox VIP Lounge in Johannesburg.

As fans and foes shared their thoughts on the new “couple”, some have been celebrating the blossoming new love while others aren't happy.

The couple saw scrutiny coming from poet and activist Ntsiki Mazwai. She put them on blast and said she found their union “deeply disturbing”, especially because it hasn't been a year since Anele Tembe died.

In a series of tweets, she shared her discomfort about things that transpired around Nelli's funeral.

“At the funeral, Nelli’s siblings had to walk behind the Forbes family. Barely six months had passed and how quickly their little sister was replaced. After they couldn’t walk beside her coffin. This is so deeply disturbing for me”.

She continued: “I have siblings. I remember how I found that moment was incredibly wrong. Ego was placed over genuine love.”

“Soulmates neh. We get over them so quickly. So quickly,” tweeted the poet.
TshisaLIVE
5 months ago

Sealed with a kiss! AKA & Nadia Nakai 'confirm' their relationship with raunchy video

Nadia Nakai and AKA have tweeps convinced they could be Mzansi's next favourite couple.
TshisaLIVE
7 months ago