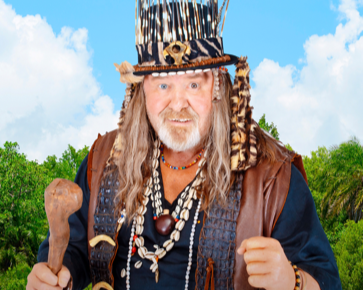 Leon Schuster is back with another offering and his slapstick comedy Mr Bones 3: Son of Bones the sequel to Mr Bones 2 is set to premier next month.

The blockbuster film will be released in cinemas nationwide this Easter.

In a statement shared with TshisaLIVE the cast of the flick was revealed.

Mamba is one of the few Kuvukis who travels outside of Kuvukiland. She is also an entrepreneur, cynic, crook and utterly charming. She and Bones have a past with each other, which is hinted at, but never disclosed. It is Mamba who sells out her people to the illegal oil drillers. She can also handle herself in a physical brawl.

Sans Moonsamy stars as Alvin the man who “arranged” the oil drilling contact with the Department of Mineral Affairs though some unnamed community connections.

Jay Anstey plays Gabrielle a professional game ranger employed by Jack and Alvin as their guide as they recce Kuvukiland and its surrounds.

Gabrielle is a professional game ranger employed by Jack and Alvin as their guide as they recce Kuvukiland and its surrounds. She is beautiful, good at her work, but naïve about the ways of the world and the desires of the male species. As she discovers the unscrupulous oil drilling intent of her employers, she is thrown into turmoil. Not to mention by the love struck attentions of young Mathambo.

Jerry Mofokeng plays The King. Daniel Janks and Sthandile Nkosi make up the list of the key characters in the much anticipated film.

“Mr. Bones 3, Son of Bones begins at the turn of the last century, when we witness (via flashback) the burying of the Kruger millions by two Boer soldiers, who then kill each other through idiotic greed, leaving the Kruger millions hidden in a graveyard in Kuvukiland. Now, in the present, a scrawny businessman named Alvin (Moonsammy) and his Texan engineer partner named Jack (Janks), together with their beautiful guide, Gabrielle (Anstey) are plotting to mine for oil in the pristine land which would leave it an oily mess. Bones and Mathambo must devise a way to outsmart the opinionated Westerners,” read the statement

When the trailer to the film was released last year it caused quite a buzz on social media.

Two years ago streaming service Showmax removed several Shuster films, including Mr Bones and its sequel, as part of its efforts to take down perceived racist content on its platform.

Shuster told Sowetan at the time he was “very disappointed” by the decision and did not see the reason behind it.

“I try to bring people together with laughter. There is no race in my heart. I don’t see black, white, pink or purple. I just see a person. If they are in my region when I do candid camera I go for whoever it is. I don’t have preference for one race.

“There has never been racism in any of the stuff I’ve done. My heart is that of a living and loving South African.”

"An African action movie about the release of Nelson Mandela? Fu*#ing finally."
TshisaLIVE
3 months ago

"It was such a challenge to wrap my head around what happens when you die so getting into the rehearsal space actually helped liberate that fear for ...
TshisaLIVE
4 months ago