Who made the cut? — All you need to know about ‘Diamond and Dolls’ S2 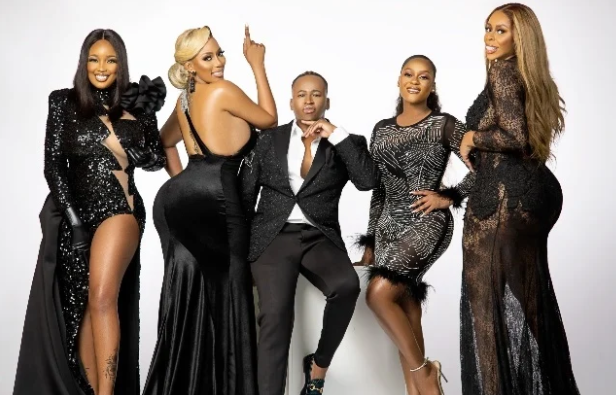 The new cast members of the hit reality show Diamond & Dolls  has been unveiled.

While self-described world traveller Lumi Jemma and boutique owner Lolo Mlunjwana did not make the cut, Eva and Inno are back to bring the excitement that captivated fans in the first season.

Katlego Dhlomo and Arteece Noel from America join the show that will be broadcast in SA, the US and Brazil.

Executive producer and diamond among the dolls  Tebogo Ramokgadi said the decision to bring in new faces was to broaden their reach.

"I wanted an international approach. Everybody in the show does the same thing: hosting.

"Diamond & Dolls is a movement, it's raw. We fight a lot but at the end of the day the three of us have one goal in common: to help each other. We like working as a team. You will see a lot of women coming in and out but I doubt these two will go," he told TshisaLIVE.

"I love the girls but some are just a nightmare to deal with."
TshisaLIVE
4 months ago

The OGs of the show, Eva and Inno Morolong, said fans had a lot to look forward to.

"I am very passionate about reality shows. I will literally find content out of nothing. With the other dolls, Lumi and Lolo, I don't think they understood. They'd take things personally but they don't understand that cameras are rolling. It's about discipline," said Eva.

Speaking about why she chose to speak about her “feud” with Ayanda Thabethe during an interview with MacG on Podcast and Chill  in March, Eva said she felt it was important to share her side of the story.

"I wanted people to hear my side of the story and make sure they know."

Eva reveals she knew Ayanda Thabethe's baby daddy before he met her.
TshisaLIVE
4 months ago

Inno, who has her own drama with actress and podcaster Tebogo Thobejane after their friendship fallout, spoke about why she chose to address their feud in rants on social media.

Inno Morolong went on a rant on Instagram live, alleging Tebogo Thobejane is a scammer, sex worker, pimp and 'muti' user. and Tebogo has hit back.
TshisaLIVE
4 months ago

"We're no longer friends. It was dirty. It was somebody I loved., I still have a soft spot for her but I just don't want her in my life."

"What I like about the show is that we grow. When I started in the first season I was chubby, and now I'm growing. Hosting has been in me. When it comes to branding, I'm glad I'm a real doll so I'm confident. I'm coming for everything they said I couldn't have," she said.

"Being called to do reality TV was from a place of being vulnerable, open and sharing, and never oversharing."
TshisaLIVE
3 months ago

"'The Real Housewives of Lagos' is going to be lit," said one tweep.
TshisaLIVE
4 months ago

WATCH | Everything that went down at the LIT #RHOLangos event & it's pink carpet!

“Ain’t no party like a Lagos party!”
TshisaLIVE
4 months ago