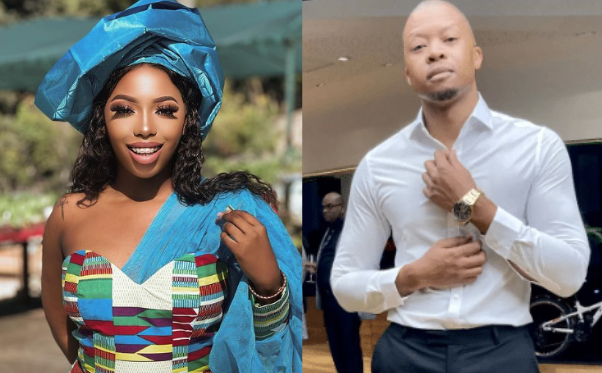 Twitter was abuzz on Sunday night as tweeps witnessed the #NationaDate of rapper Gigi Lamayne and local twelep Michael “Mr Smeg” Bucwa unfold on the timeline.

It was the popular Twitter influencer's second celebrity date after he went out on a highly publicised date with actress and businesswoman Pearl Thusi.

Michael, popularly known as Mr Smeg, tagged Gigi in a post asking her to go out with him for lunch and the rapper agreed.

The pair at had their date at DJ Shimza’s restaurant The Hang Awt 1632  in Thembisa, Soweto.

Though the rapper was late, and tweeps found out from Mr Smeg's tweet, she arrived and soon after pictures of them together looking cosy started doing the rounds on the timeline.

Gigi Lamayne is late for our date pic.twitter.com/k573khkXM2

DJ Shimza took to his Twitter timeline to share images of the pair with the caption, “National Hang Awt with Michael Bucwa and Gigi Lamayne”.

Gigi went to Twitter on Monday and in a series of tweets thanked the influencer for a beautiful conversation they had on their date.

“And though all of you assumed a lot, his intentions are pure and genuine. He really enjoys making people feel special and loved, but he moves with so much wisdom. Thank you for opening my heart and mind. Thank you for being real with me,” she tweeted.”

“Thank you for giving me the flowers that I never got because it was easier for people to throw me in the dirt at my lowest. I know who I am now and it’s even better that a black brother reminded me of that. I have a friend and confidante in you for life. Thank you,” tweeted Gigi.

In January this year Mr Smeg went on a date with actress Pearl Thusi which saw brands such as Tshepo Jeans, Era by DJ Zinhle, Drip, Mercedes-Benz, Drip Footwear and many others contribute to their special day which was live-streamed for fans to see.

I had such a beautiful conversation with @MichaelBucwa yesterday and something I thoroughly learned was that his love for appreciating people who never get their flowers is what he does.

Another 'national' date? Gigi Lamayne and Mr Smeg set to go out on a date

Mr Smeg "shoots his shot" at another celeb.
TshisaLIVE
3 months ago

"I had an amazing time and I loved how everyone could be a part of that moment," Pearl Thusi told TshisaLIVE about the #NationalLunchDate
TshisaLIVE
6 months ago

WATCH | All the right vibes! Inside Pearl Thusi and Mr Smeg's #NationalLunchDate

"Looking at brands participating on the #NationalLunchDate, this will be by far the best advert for Black Excellence yet," said one tweep.
TshisaLIVE
6 months ago