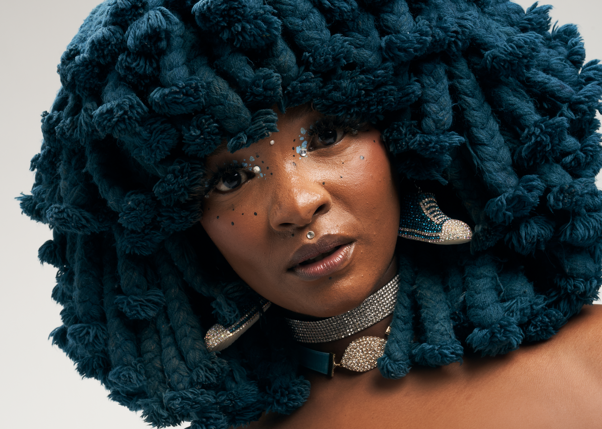 Moonchild is on a mission to spread the message of 'women empowerment' throughout the globe with her music.
Image: Supplied

Moonchild's domination in the amapiano, gqom, grime, pop, house and R&B genres has her making waves in and beyond the borders of Mzansi.

“The song is about bad boss bitches with big dick energy who look fly while they're running their shit. We can be cute, so our power might look unthreatening, but don't be fooled, we’re powerful and we're here to f**k s**t up!” Moonchild said in a statement shared with TshisaLIVE.

Trillary said she was excited about the collaboration and to meet the SA-born star in person and share the spotlight with her while touring UK together.

“Recording the track was a cool, fun experience. I love the Two Inch Punch production. Meeting Moon in person was also great. We were able to go to a gig and vibe at the studio,” she said.

Moonchild has become well-known for unapologetically spreading her message of female empowerment, and her double album is set to continue her mission.

Having worked with renowned international stars Gorillaz, WizKid and Beyoncé, Moonchild has been able to broaden her reach.

The first side of the album is a journey through the different moods and aspects of her personality. The second side leads into a clubbier amapiano space.

“My music is about the liberation of women, in the bedroom, in the boardroom, knowing your power. I need to be heard by a lot of people.”

Moonchild plans to fly the SA flag high around the world and bring attention to Mzansi's talent abroad, and she's done that by collaborating with rappers Blxckie on ULi and Sir Trill on Soyenza.

Phases will be released via Transgressive Records and Gallo Record Company on June 10.

“This song means so much to me. Especially as the people being entertained in the strip club are the ones condemning these women in the outside ...
TshisaLIVE
4 months ago

“I am super excited about Covivi visuals dropping because it is literally us having a conversation with the one person/thing that has been blocking ...
TshisaLIVE
8 months ago

Moonchild gets candid about dealing with her demons through her music

"I'm definitely healing from that experience. The demon I was dealing with at that time was someone who was very invasive and had an opinion in my ...
TshisaLIVE
9 months ago

The star believes that relationships have suffered at the hands of Covid-19.
TshisaLIVE
11 months ago