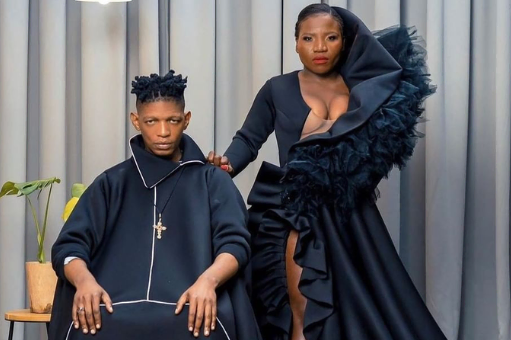 Makhadzi is glad to see the legacy of fashion designer Quiteria Kekana continue after his death.
Image: Instagram/ Makhadzi

The family of late international fashion designer Lebogang Quiteria Kekana are set to host a tribute fashion show to honour his legacy.

Quiteria died on April 17 2022 after losing his battle against cancer.

His brother Vincete Moet Kekana, Quiteria Atelier creative director,  and mother Violet Kekana, who were part of his journey in the fashion industry and witnessed him pursue his dream, including during the roughest times of his illness, are inspired to continue where he left off.

“This makes me happy to see his legacy continue without him. It helps my grief.  After he parted ways with George Malelu, his business became a family business. I had been working alongside him and his brother. We were hands on most of the time,” Violet told TshisaLIVE.

Vincete, who the eldest in the family, had worked with his brother for more than a decade.

Before the fashion designer's death, Vincete created a 50-piece collection while he was ill, dedicating it to him with the hope he would get better.

Since circumstances have changed, he's grateful Quiteria was pleased with his gesture.

“He was pleased when he saw the garments before he passed. Everything we did together complimented each other so he was happy,” he said.

“The collection I made is to say thank you. Not only for him but the fans and everyone who have been supporting Quiteria Atelier and they should not stop.”

The collection, named after Quiteria's first name 'Lebogang', which means thank you, is a first coming out of Quiteria Atelier as the fashion designer never made a 50 piece collection.

“I thought because we're honouring him, it has to be bigger. We want the legacy not nly to continue but to become biggers.

“It has been difficult, not only dealing with the loss but also on the business side. The legacy he left is humongous so it comes with a lot of pressure. He has left a legacy for every single child in Africa.”

The tribute collection is set to make its runway debut on May 13 at Kings and Queens of Baobab in Polokwane.

Makhadzi, who was dressed by the designer on occasions and modelled for him, said she was happy to see the family help continue his legacy.

“To see Quiteria's legacy continuing after his passing is a great initiative for his family and the continent. The man contributed a lot in the fashion industry globally. We need to celebrate him. If the Versaces of this world are celebrated many years after their passing, why shouldn't we do the same for ours,” she told TshisaLIVE.

Speaking of their business relationship and friendship, the Limpopo-born star said she would forever be grateful of the opportunities Quiteria afforded her. She said she felt he was supposed to be honoured while he was alive.

“Quiteria played a major role in my life. When I grew up I was body shamed. When he first saw me he saw a beauty model. That is when I started modelling for him.

“It is very sad that he is being honoured now and not while he was alive. This should be a lesson that we give flowers to our heros and heroines while they can smell them.”

Former business partner Malelu is set to host a tribute show at the Mercedes-Benz Fashion Week in Kigali, Rwanda to honour of his life.

Vincete says there's another surprise for fans set to come as there's a 40-piece collection by the fashion designer that has not been unveiled.

Quiteria Kekana is remembered as an ambitious and prayerful spirit who was a trailblazer and always went for his dreams.
TshisaLIVE
1 month ago

A candlelit ceremony at Quiteria Atelier studios in Melville is set to take place in his honour on Wednesday evening.
TshisaLIVE
1 month ago

From Paris to Beyoncé: Five things to know about renowned designer Quiteria

A look at the career and personal life of the beloved fashion icon.
Lifestyle
1 month ago