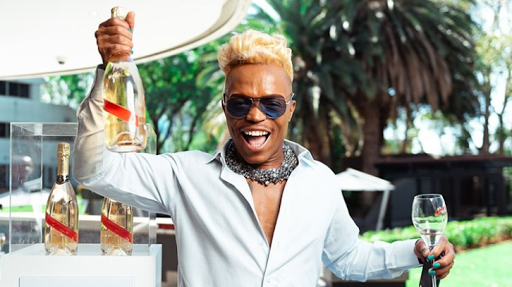 Somizi is beaming with pride about his celebrity friends' business ventures.

Somizi shared a compilation video of Cassper Nyovest, DJ Zinhle, Pearl Thusi and Kelly Khumalo, who have dipped their toes in the liquor business, gushing over their success.

In an interview on YFM, Cassper said a renowned “alcohol guru” approached him to embark on the venture. They launched one flavour and are looking to expand in future.

“This is why we dream big. Why we work late, why we say no to others and yes to ourselves. Because hard work and determination pay off,” she said before introducing her fans to her new baby.

“We grew up in an era when this type of opportunity was impossible. You never had the power and that's why I love how the industry has evolved over the past few years because now we understand — either through social media or the evolution of the internet — the power we have as public figures,” she told TshisaLIVE.

'I’m forever thankful for my team,' Somizi thanks his team for the love

"You guys are also full of love and heart I really enjoyed this season ... thanks for the flowers and the hospitality from day one," he wrote
TshisaLIVE
2 months ago

"Last night would be the last night together, literally. I even made fun of you for greeting each and every person, including the kitchen staff," ...
TshisaLIVE
2 months ago

"I have learnt the hard way. It is important to keep things in before it is signed, sealed and delivered".
TshisaLIVE
2 months ago

"Sometimes when people show you who they are, you leave them."
TshisaLIVE
3 months ago