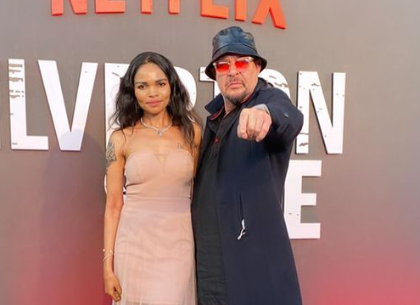 Jamie Bartlett's girlfriend Rosa Onious spoke about being distraught by the death of her partner of nearly four years at the memorial in Zone 6, Soweto on Monday.

This after the veteran actor's send off at St George's Cathedral in Cape Town on June 2. He died last month after suffering cardiac arrest.

Rosa was emotional and sobbing during the ceremony and recalled their first date and how much of a gentleman he was to her and the growth of their relationship.

She was still in grief while recalling the many travel plans and other escapades they had in the pipeline that she hoped to see them follow through.

“Jamie and I loved to travel, we had plans this year to go places, business ... but God had other plans. I'm angry, I'm sad, but I'm trying to understand that there is a purpose for him wherever he is. A part of the house still smells like him and it's difficult,

“I remember on the morning that Jamie passed, he told me how much he loved me and he can never see his life without me in it, and I feel the exact same ... I don't know how I'm going to do this, but I'm going to have to do it. I could have never pictured myself without him.”

Though she had prepared a speech to commemorate him, Rosa ditched the note to speak from the heart, gushing over the love he spread to everyone he met.

“He wanted to make everyone feel special ... he wanted to support, to show love, he was a people's person.”

Watch the full memorial service below:

" I have surrendered to what it is but it hurts like hell."
TshisaLIVE
2 months ago

"Jamie never wanted to settle for the simple choice, the expected choice. He was always pushing, he was always searching he was always trying ...
TshisaLIVE
2 months ago

Jamie Bartlett was grateful for his partner Rosa Onious' companionship

"He'd keep saying he wished to share this or that other moment with you. Thank you for the love, the joy of home life you provided," Jamie's friend ...
TshisaLIVE
2 months ago

"He plunged into love with Camilla and in marriage they gave life to Hector, whatever difficulties there would be in time, Jay and Cam overcame them ...
TshisaLIVE
2 months ago