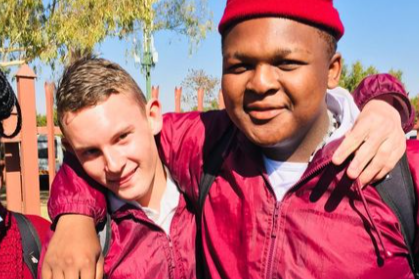 Matenas Wadi Yobisi has more than 20,000 followers on Instagram and has frequently shot up the trends list on Twitter with his dance moves. Now that he has a budding career as an entertainer, everyone wants to know who is.

A month ago, after Mandla Kayise, 19, decided to film his best friend of nearly two years, Martinus Olckers, aka Matenas Wadi Yobisi, 16, dancing, and the internet hasn't been able to get enough of the teen.

While it was unplanned, Matenas' vibe has led to the pair being booked and busy.

Speaking to TshisaLIVE, the two pupils from a special school in Pretoria, Suiderberg School, said they never thought they'd become this popular, and want to make the most of the attention they've garnered on social media.

“Mandla was asking to take videos of how I dance. That's how I got popular. It feels amazing. It feels like I'm dreaming as I get more popular,” Martinus said.

Mandla said they never imagined hey would go viral as when they started it was for amusement.

“Those videos, we took them as a joke. We were playing and then things got very serious. We went viral with the second video. The first we took as a joke. The second one went viral so I opened an Instagram account so he can have a platform with his pictures and videos. When we posted the third one social media went crazy,” Mandla said.

The two viral stars have formed a music group with their friend VusiR5 and are set to sign a distribution deal contract with Sony Music in the coming week as they release their debut single Matenas on June 24.

“We are like a team. We work together. VusiR5 is a singer and Mandla can dance too,” said  Martinus.

“It's like a music group. My parents are so happy and support me. We will balance properly with school when it opens. Now the schools are closed so we'll be doing a lot of work,” Mandla said.

On Thursday, Matenas topped Mzansi's trends list after a video of him at a club in Soshanguve called The Want went viral on social media. He was seen dancing with a half-naked entertainer.

Martinus' father Lucky Olckers told TshisaLIVE he has not seen the video and could not comment on it. However, he expressed pride in his son making a name for himself.

“I hope he will be successful. He will be better than me. I'm just a mampara. I'm a mechanic. So if he's going to get in a better field that's great.”

Martinus said he's excited about his newly acquired fame and wants to make his father proud.

My father says I mustn't do funny stuff. I mustn't just do the gigs, I must get something out of the gigs.”

New kid on the block to represent Africa at Nickelodeon

Newcomer Lerai Rakoditsoe is making history as the first face on the continent to front a show on kids channel Nickelodeon Africa.
TshisaLIVE
1 year ago

Uncle Vinny opened up about his rise to stardom and venturing into reality TV.
TshisaLIVE
10 months ago

“It’s on her body, so it’s okay. She hasn’t asked anyone else to wear it. If you don’t like it that’s also okay but let’s learn to let people be.”
TshisaLIVE
8 months ago