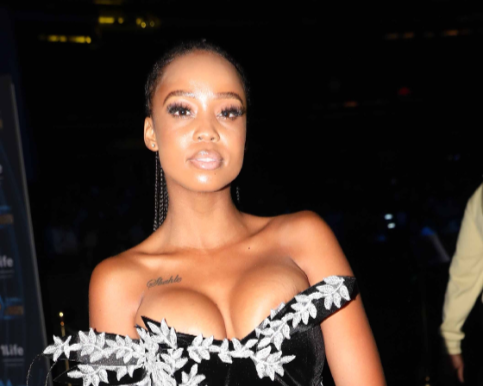 This is Ntando Duma at the DSTV Mzansi Viewers’ Choice Awards at Ticketpro Dome, Johannesburg in 2020. In 2022 though, sis caused a frenzy!
Image: Veli Nhlapo

Media personality Ntando Duma took “nude glam” to a whole new level on Saturday night at the DStv Mzansi Viewers’ Choice Awards (DStvMVCA when she channelled her inner Rihanna and Lizzo with a sheer number that landed her on the Twitter trends list.

The actress and mother of one decided to show off her absolutely flawless body in a see-through, nude pink dress that was embellished with bling by Miano Designs. Pairing the look with a simple hairstyle (a bun) and natural makeup, Ntando let her dress and her body do all the talking when she strutted her stuff on the “blue” carpet and later on stage to present an award.

While she looked poised and graceful, the social media streets were the exact opposite as the peanut gallery gave their two cents about her dress which sparked debates about everything from nudity on television to fashion, feminism and global warming!

Taking to her Instagram, Ntando — who probably anticipated the reaction — made it known that her outfit did exactly what she set out to do.

“Disgustingly delicious fine a** mama ENTERED the chat. Tshabang ke fete! I love you @mianodesigns thank you so much for this dress! We DID IT! ” she wrote.

Check her outfit out below.

Here are some of the tweets reacting to her outfit.

What nonsense is Ntando Duma wearing? 😏🤦🏻‍♂️ she just wanted to show us a glimpse of 🍑🤷🏻‍♂️ #DStvMVCA pic.twitter.com/mhJMj5lgxh

I knew Ntando Duma was going to trend because y'all are obsessed with nudity and sex. Y'all praise naked people more than talented people. Y'all hype everything in this country. #DStvMVCA

#DStvMVCA my views
Best dressed :
- Blue mbombo
- Ntando Duma
Worst dressed :
- Somizi
- Lawrence maleka (since he was the host they could have done better, I was not feeling those outfits 🤦🏽‍♂️) pic.twitter.com/rB9FP3wBZx

A well-deserving queen! Makhadzi reigns supreme at the #DStvMVCA

Lawrence Maleka's fans also proved that he's all that and more as he walked away with two awards, just like Makhadzi!
TshisaLIVE
1 month ago

A side to Young Stunna you've never seen.
TshisaLIVE
1 month ago

Is Beyoncé’s new single the soundtrack to the ‘Great Resignation’?

To some, the lyrics channel the post-pandemic situation in which businesses are struggling to find enough workers
Lifestyle
1 month ago