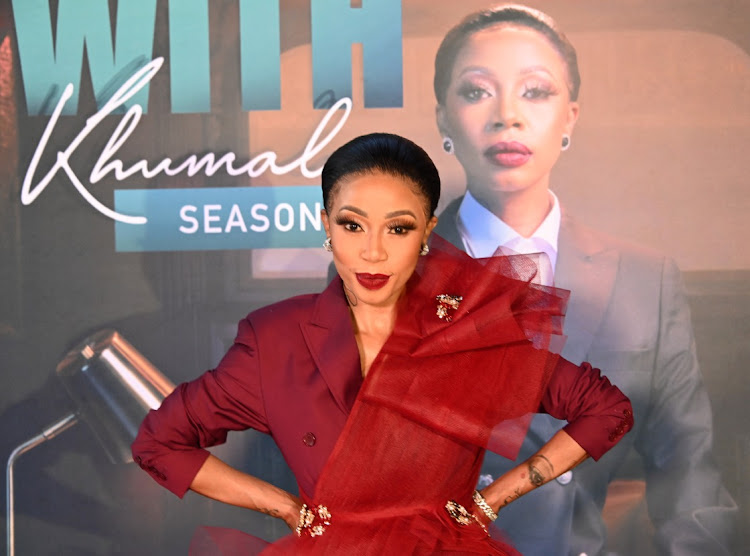 Kelly Khumalo at the season 3 premiere of 'Life with Kelly Khumalo' in The Mesh Club, Rosebank, on July 2 2022 in Johannesburg.
Image: Oupa Bopape

Singer Kelly Khumalo set tongues wagging on Monday when she opened up about Senzo Meyiwa, the ongoing trial against the five accused of his murder and how she believed the criminal justice system failed to protect her from death threats she received.

In an exclusive interview with eNCA, Kelly, who sat alongside her lawyer Magdelene Moonsamy, held nothing back.

The singer spoke candidly about all things Senzo and how she's been dealing with everything.

''We have a problem in our country and this is not just about Kelly Khumalo, the musician. This is about an individual in the pits and darkest place of wherever it is, where they lose loved ones and justice is not served.

“I think the lowest point for me is being let down by the law. As a SA citizen I trust and believe in the law to protect not just me, but my family and our society. But with what has happened to me, I have had my life threatened and family threatened, not once, but multiple times. And I feel like the law is not coming into place to protect and make me feel like that it is within my right to have protection for myself and family,” Kelly said.

The singer also shared that she still missed Senzo and she thought about him “all the time” and she still thinks he would have been an amazing father to their daughter Thingo, who is now eight years old.

Meyiwa was shot dead at a Vosloorus property in October 2014.

However, it was a passing comment about how her affiliation allegedly made Senzo “famous” that landed her on the Twitter trends. Tweeps felt it was disrespectful to Senzo and his legacy.

While attempting to drive home the point that she had “nothing to gain” from Senzo's death, Kelly said: “Nobody knew who Senzo Meyiwa was until he was attached to the brand 'Kelly Khumalo'.”

Kelly says nobody knew who Senzo was till he was attached to the brand Kelly Khumalo…. Haibo does Kelly know Senzo was a gk of one of the biggest football clubs, and the national team???

Kelly Khumalo really said this yall, i have no words 💀 pic.twitter.com/7E4iOlHVsL

Kelly Khumalo was the first in the spotlight but wasn't bigger than Senzo Meyiwa. Also, Meyiwa wasn't bigger than Kelly because the two were in two totally different career paths. You can't say Halle Berry is bigger than say Megan Rapinoe; you'll be comparing apples and potatoes. https://t.co/ykoDefQz5Z

Kelly Khumalo is spitting on Senzo Meyiwa’s grave now. The disrespect is just too much! pic.twitter.com/hxDUbeTcHL

Kelly Khumalo might have not known Senzo before meeting him , that we don't dispute. But to say "Nobody knew who he was before they met"... So Kelly is kinda saying she made Senzo ?? Now that's Disrespect to Senzo Meyiwa's Legacy & Family https://t.co/Yq2WX7EKCB

Let us gather here if you knew who Senzo Meyiwa was before he met Kelly Khumalo. pic.twitter.com/TQLFFoSfd4

Someone tell her to shut up please 🙏 pic.twitter.com/nIiviRes6O

The second docket, which accuses singer Kelly Khumalo and those who were with her in the house where Senzo Meyiwa was shot dead, was only an internal ...
News
1 month ago

“They hate the fact that I am the one who did not die that day,” Kelly Khumalo said in her reality TV show season three teaser.
TshisaLIVE
2 months ago

Advocate Malasela Teffo, who represents four of the five men accused of killing Senzo, made the allegations during the cross-examination of the first ...
TshisaLIVE
2 months ago