'Was that a high five?' — Fans 'certain' AKA and Cassper buried the hatchet 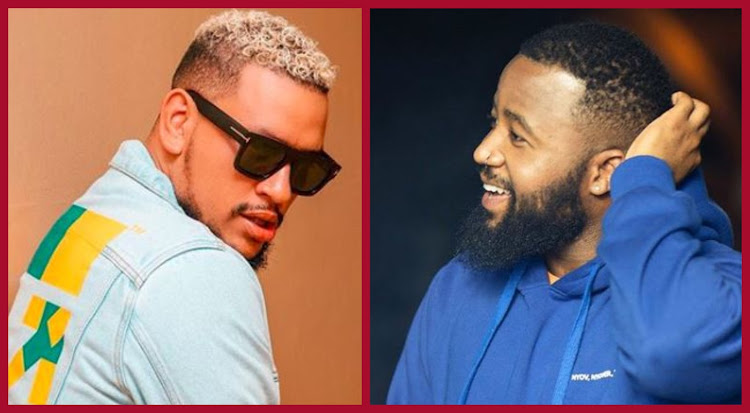 Rappers Cassper Nyovest and AKA shocked tweeps on Sunday when a clip of them high fiveing each other surfaced on Twitter timelines.

The pair were part of Big Zulu’s Celebrity Soccer Games over the weekend.

The clip circulating on Twitter had fans doubting if the feud between the pair ever existed.

The rappers' beef has been raging on for years since AKA slapped Cassper to their never ending boxing match challenges that never really seem to  materialise.

AKA and Cassper formed part of team “hip-hop” at the Celebrity Soccer Games on Sunday at the Wits Soccer Stadium in Johannesburg.

Big Zulu, the rappers were joined by other stars like Kwesta, Sjava, and Tbo Touch. The hip-hop stars  faced off against team “gqom”, captained by DJ Tira, which included the likes of Mampintsha, Naakmusiq, DJ Cleo, and Andile Mpisane.

In another clip, Cassper passed the ball to AKA and it really did seem they were getting along.

Cassper was praised for his goal scoring like a pro and he took to his timeline to thank a fan who was giving him kudos for his mad skills on the pitch.

“Thank you. I needed to make sure with that one, eish. We were down by 1 goal. NY 7 aka Cash N Carry”

Big Zulu took to his Instagram timeline to thank all the players involved.

So AKA and Cassper were playing on the team yesterday, I now want to hear them on the same song.

That guy saying "hebana" when AKA and Cassper high five each other in that video is all of us on Twitter. 😭😭😭

Cassper and AKA in the same team ??? 😭😭😭😭😭 Yohh did they settle the Beef ?? 🥺🥺🥺🥺 Yoh big Zulu packing though pic.twitter.com/SEvnQXtLlF

Cassper Nyovest grateful for 'The Braai Show' getting Safta nod

Safta recognised 'The Braai Show' success even after all that drama.
TshisaLIVE
3 weeks ago

Who's ready to go to big festivals and concerts? Scorpion Kings already has one coming in July!
TshisaLIVE
1 month ago

"May you remember your own advice when you face the same difficulties/situation that you judge others on," DJ Zinhle responded.
TshisaLIVE
1 month ago

Get a boyfriend who will post you as much as AKA posts his bae.
TshisaLIVE
4 weeks ago