‘Nota is not well in the head’ — Rashid Kay hits back

“I see a lot of podcasters giving him too much attention, but Nota is not well in the head,” said Rashid. 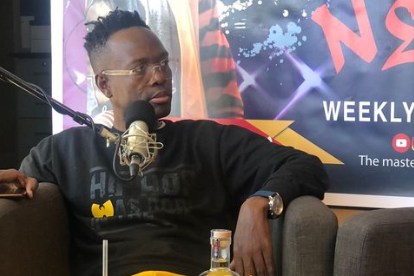 Hip-hop artist and radio personality Rashid Kay has responded to Nota’s claim in one of his podcast interviews that he did nothing for rappers Gigi Lamayne and Big Zulu.

In a recent interview with rapper Gigi Lamayne on her podcast Point of View, Rashid said he only remembered one encounter with the music exec.

“The only time I spoke to Nota, I think I met him when he was still with Kwesta, at the airport in Durban King Shaka. They were flying to Cape Town, I was flying to Durban, and our flights were two hours away and we chilled together. He did all the talking for the whole two hours.

“It’s not the first time he spoke about me, but I’m not gonna try to entertain him. I see a lot of podcasters giving him too much attention, but Nota is not well in the head,” he said.

Nota has been on the Twitter trends a lot lately, especially after singer Berita revealed she had separated from Nhlamulo “Nota” Baloyi after a year of marriage.

This follows Nota comparing Mihlali Ndamase to a dog and saying she can be “put down” on an episode of the Nkululeko n Cultr podcast.

“They don’t understand that if Mihlali is for sale, that means she’s an object, which means you can kill her if you want to. It’s like buying a dog. You can put it down,” he said.

Berita took to her Twitter timeline to pen an apology to the YouTuber, revealing she had left her marital home in January this year, and suggesting Nota’s alleged mental health issues had taken a toll on their union.

“I am no longer married to Nhlamulo ‘Nota’ Baloyi. I left our marital home on January 13 2022. As it stands we are separated,” she wrote.

In another Twitter post, Berita said she had refrained from speaking about their relationship because she was worried about her safety.

“I have been quiet because my safety has been a huge concern. This man is extremely irresponsible, reckless and unruly. He simply does not listen to anyone. I do not condone his actions. I cannot even begin to count the numerous times he has erred in his speech,” she wrote.

"Your decision to leave us is so final. & so triggering. I beg you to consider speaking to any one of us about it first."
TshisaLIVE
3 weeks ago

"I need to speak out against this pandemic that is slowly taking the youth and people don’t understand it."
TshisaLIVE
4 weeks ago

"I could've just given up but I think this is what the universe wanted for me. So, yes, music is great and nice but once in a while you want a ...
TshisaLIVE
1 month ago

Toya Delazy claims the SAHHA were homophobic towards her in 2013, but the organiser says that wasn't the case and she is "chasing clout"
TshisaLIVE
9 months ago