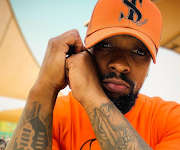 Taking to his Instagram timeline on Thursday, he said he bagged the role of Sabelo in The Black Door.

The adults-only drama, produced by Black Brain Pictures, premiered in April and has had Mzansi glued to their tellies.

“Meet Sabelo Cele aka #BEAST... “He is cunning, calculating, very smooth with the tongue and can even sell ice to an Eskimo ... His @ TheBlackDoor on a serious and very dangerous mission. He's not what you think he is,” TK wrote.

Radio personality and actor Mohale Motaung landed the role of Mo Jack, a patron in the risqué telenovela set in the high-class world of a pleasure dome brothel.

“The other characters I've played are very much reserved, not far from Mohale. But with this particular character, I had to really step out of my comfort zone because I am a party man, I like the strip club. Mentally and emotionally, I had to prepare myself for that,” he told TshisaLIVE while on a break in the UAE.

Speaking of how he prepared for the role, Mohale, who has starred in MTV's Shuga and Rhythm City among other productions, said he had veteran actress Camilla Waldman to thank.

“I've had a lot of sessions with her, even before. When I go to auditions I go and see her. She's really my mentor in the acting industry, I remember she helped me prepare for the Rhythm City audition and I bagged that role.”