The Big Read: Handwriting from the heart 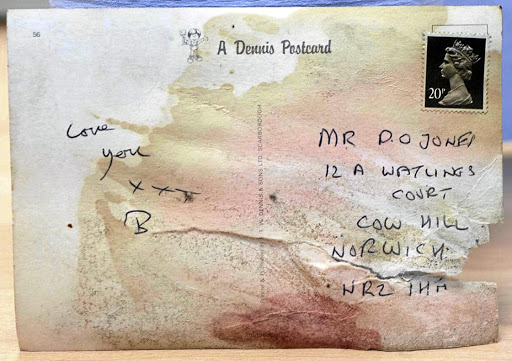 I received a postcard from a friend the other day. It was waiting in my mailbox when I arrived home from a trip, and I was excited to read it because everyone is always excited to receive handwritten mail.

The card was from her trip to the East to attend a wedding, and it was playful and funny and made jokes about the weather and about the other guests and I enjoyed it not only because it was funny but because it was proof that this person I loved had been thinking of me even while far away, even on holiday.

I wanted to call her up right away and tell her the card had arrived but I didn't because the card had been written and posted more than a year ago, and in the interim something has happened between us and we are no longer friends and I don't believe we ever will be again, but I wished I could reply to that card with a card of my own, and that it would reach her a year ago and that we could keep writing to each other, back and forth, two friends still living in a distant part of the universe where we don't yet know the things that we know about each other now.

Late one night in 2012 an Australian schoolteacher named Anne O'Sullivan sat with her husband on the balcony of their cabin on a cruise ship passing through the dark Indonesian waters near Komodo Island. They were discussing whether it's better to love or to be loved, and at a certain point they wrote that question on a piece of paper, along with their contact details, sealed it in what I can only assume was a now-empty wine bottle, and threw it overboard. I like to imagine that they then retired to both love and be loved by each other.

Fifteen months later, a South African woman named Fiona Marlton from Creighton in KwaZulu-Natal was on holiday in southern Mozambique, awaiting the arrival of a friend. She found the bottle bobbing in the shallows at the edge of the sea. She wrote a reply: "It's better to be loved. But to be loved you must love."

Personally, I don't agree with either part of that reply but there are no wrong answers to good questions and I'm not the one who found the bottle. The women exchanged phonecalls and e-mails, discussing love and friendship and their lives, and after a time Anne and her husband flew to South Africa to visit Fiona. In the interim, the friend Fiona was waiting for in Mozambique fell ill and died. "I lost a good friend," Fiona says, "but I found a new one."

When I was very young, one of the congregation at my parents' church was an elderly woman named Betty who lived alone after the death of her husband. On Sunday afternoons, after church, members of the congregation would take turns to go round and visit her for tea in her small house with hydrangeas growing in the garden.

Once I went with my mom and sat there anguished in that silent house with its ticking clock and the clink of teaspoons on china. I was too young to endure it. Betty told me that I should acquire the habit of writing letters. She said that each week she wrote to her sister and to her mother and to old schoolfriends and to her husband, telling them her news and recalling good times. She said it was a great comfort. She said writing to people made it feel as though they were still there, somewhere. I didn't know what to say. Later my mom suggested that it might be nice to write to Betty sometimes, telling her news from school, but I never did.

In 2012 construction workers renovating the New Street railway station in Birmingham came across a Royal Mail postbox filled with dusty letters and postcards dating back to 1989. The box had been discontinued in that year but had never been removed, and the local residents did not notice that the cards and envelopes they slipped through the slot never left.

For 23 years the best and worst parts of those people accumulated unshared in that red metal box beside a busy, noisy train station. I hope that at least one of those letters was a letter written in anger or in haste, perhaps calling off a love affair or venting fury or letting down a friend or intending to cause pain, and that the person who wrote it and posted it had instant regret and would have done anything to take it back, would give anything at all if it would just never be delivered.