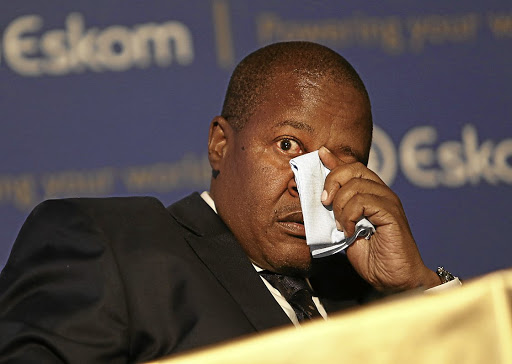 We have not yet seen prosperous-looking men descend the steps from a courtroom down to the cells. Believe me, though, when I say the bad guys of the state capture story are quaking in their boots. They know that, as the popular township dirge Liyeza Na Kuwe (It's Coming To You, Too) says, their day is coming - and soon. This week we saw the start of it.

The chief financial officer of Eskom, Anoj Singh, was suspended this week after Rand Merchant Bank, the Development Bank of Southern Africa and Barclays Africa put pressure on Finance Minister Malusi Gigaba to act against the man who is allegedly at the heart and centre of stealing from Eskom and giving contracts to the president's handlers, the Gupta family.

Gigaba did not pick up his phone and call Lynne Brown, the now also compromised Minister of Public Enterprises, and ask her to begin the motions of suspending Singh because he actually believes things are bad at the electricity supplier. If he actually believed that he would have made the call a long time ago. He did it because the banks were putting pressure on him and Brown called the Eskom chairman to suspend Singh because she, too, could not protect him.

The next major political marker in our politics will arrive in January 2018.
Ideas
4 years ago

Gigaba and Brown could not stop the good men and women at RMB, DBSA and Barclays Africa when those good people stood up - finally - against looting and theft.

That is where our power as a populace lies. Business leaders, non-governmental organisations, civil society groupings and others have immense power and they must use it. They must use it to expose and deny breathing space to those who have associated themselves with the Guptas and the Zuma project to steal from the state and to hand it over to unelected businessmen.

Last week the CEO of Sygnia announced her business would part ways with KPMG after the accounting firm failed to satisfactorily answer her questions about their association with the Guptas.

She is using her power - to speak and walk away - to make her point. Where are the rest of the good women and men of business? History will judge those who do not stand up now.

The deluge of information we now have has President Jacob Zuma and his cronies scuttling for cover.

Just a few months ago Zuma thought he would get his blue-eyed boy, Brian Molefe, into the finance ministry. Today Molefe is out of a job and may soon face criminal charges for his part in the theft and looting at Eskom - plus the attempts to defraud Eskom out of R30-million through its pension fund.

Believe me, someone will be making their way down into the cells for what has happened at Eskom. The only question is: are they prepared to go down alone? Will Molefe and Singh begin singing when the reality of 10 or 15 years in jail nears? The lachrymose Molefe, I venture, will begin singing like a canary.

Cast your eyes across the whole dirty spectrum of state capture - it is unravelling. Trillian Capital, which acted as the key enabler of corruption and kickbacks, is falling apart and its rats like Salim Essa (who sold his stake this week) and others are scuttling for cover.

The Gupta/Zuma support base is down to a few paid hands (Andile Mngxitama, Mzwanele Manyi and a handful of fake MK Military Veterans' Association members who look like they cannot be entrusted with wiping the snot off their noses).

Zuma himself is without doubt getting ready to flee the country. On Friday evening Sunday Times journalist Qaanitah Hunter spotted Zuma's motorcade of about 17 cars and outriders going to the Gupta compound at 6.28pm. I came across the motorcade at 7.57pm as it left.

It is safe to say the man was reporting to his bosses what had transpired at the ANC national executive committee lekgotla that day.

Essentially, the Guptas run the country through Zuma. Soon he will be in the dock for a crime called "treason" - betraying your country by handing it over to unelected forces.

The bad guys are losing and Zuma knows it. That's why he is feverishly preparing to flee the country.

Messages exposing president's corruption are authentic. I should know - I appear in them
Ideas
4 years ago