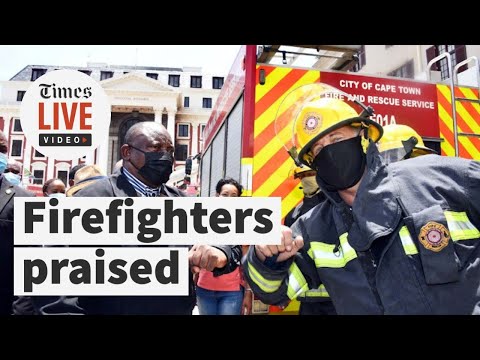 Parliament's presiding officers are expecting a preliminary report on the fire which devastated parliament by the end of this week.

This as a group of firefighters continue to monitor the remaining embers of the fire which broke out on Sunday morning.

DA MP Natasha Mazzone was among those who visited the parliamentary precinct on Monday and appeared emotional at the sight of the destroyed building.

She praised the fire department for its quick response.

“The firefighters are so brave. As we stand here now, our eyes are watering from the leftover smoke,” she said.

Mazzone said the interior of the National Assembly building, where the house of parliament meets to debate major issues, is completely destroyed.

Her sentiments were echoed by the presiding officers in a briefing held on Monday, who thanked the firefighters for their work.

Image: Elmond Jiyane/GCIS Firefighters work to put out a fire at the parliamentary precinct in Cape Town on January 2 2022.