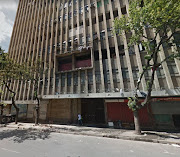 After spending a night sleeping on the pavement adjacent to the fire-ravaged Cape York building they once called home‚ the City of Johannesburg was on Thursday trying to find a place to move the scores of displaced people to.

“Unfortunately we could not find alternative accommodation for them yesterday. But we now have tents which will be given to them‚” said Karabo Tledima from the office of Mayor Herman Mashaba.

Nana Radebe from the City’s Disaster Management team said they were still trying to locate an open area where they could pitch the tents.

“We have not found a place for them as of yet but we are trying‚” said Radebe.

While only a few of the displaced residents had received blankets from the City on Wednesday‚ Tledima said the City would ensure that everyone was covered on Thursday evening. Meanwhile‚ little was still known about the owner of the building.

“It is a private owner and we couldn’t find the owner yesterday‚” said Radebe.

Parts of the Cape York building‚ situated on corner of Nugget and Jeppe streets‚ were engulfed by flames on Tuesday morning.

A total of seven people were killed in the inferno.

One died after jumping out from the third floor of the high rise building.

Six others died either from smoke inhalation or burnt to death.