The Big Read: Robbing our kids of a future 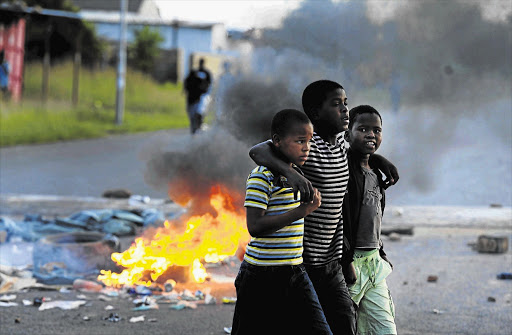 BROTHERS IN ARMS: The aftermath of a service-delivery protest in Ekangala, Mpumalanga, during which a clinic and a library were burned down. File photo
Image: LEON SADIKI/GALLO IMAGES/CITY PRESS

There is a story I mean to tell, in full and in all its glory, to my children one day. It is the story of the schools I went to.

I attended Kgomba Primary School in the small village of New Eersterus, just outside Hammanskraal in the north of Pretoria. My sisters and brothers went to the nearby Mmatso Primary School. We all graduated to Ramabele Middle School.

These three schools were built by the community of New Eersterus.

They were a poor people, the people of New Eersterus, but they built those schools with a determination and grit that I wonder at when I look back today.

New Eersterus is a village born of apartheid. The first handful of residents in that village had been kicked out of the coloured township, Eersterus, next to Mamelodi in Pretoria, because under apartheid they were "not coloured enough".

Other residents had similarly been rendered homeless when Lady Selbourne was razed and they were not considered coloured or Indian enough to be sent off to Eersterus or Laudium.

The rest of the residents were refugees, in their own country, from all over South Africa where the Group Areas Act affected them. My family arrived there after the Soweto student riots.

There were no schools.

There was one communal pump run by a fierce man called Tshabalala, who was known to whip people who did not stand in line as he ordered them to.

So the residents clubbed together and built Kgomba Primary School. The government of the day sent in a principal and teachers. When Kgomba became too small, Mmatso Primary was built. When the children got older, Ramabele Middle School was built.

New Eersterus was and still is a very poor village. Paying into the school-building fund was a massive strain on every household in that village. I have this memory that sticks to my mind: every January, if a family had not paid the building fund in full, its children would not be allowed to attend school. I remember children being turned back at the gates.

The classes would be sparse in January, but at the end of the month families would put together virtually everything they had so that they could meet their obligation to the fund and their children could go to school.

By the end of the year, virtually everyone would have paid. Some indigent families lived at the mercy of the school committees and the principal, who would allow children in even without full payment.

Every so often, a thief would vandalise the school or steal something. The whole village would go out in search of the culprit.

Sometimes someone would raid a vegetable garden. The thieves made sure they cooked and ate the carrots or cabbages that night for, if they were caught, there would be hell to pay.

When protests against apartheid gripped the village after 1984, not a single window or brick of those schools was touched. Those schools belonged to every single one of us in that village. They did not belong to the government.

I am telling this story because last week at least four schools were burnt down in villages in Malamulele, in the far north of Limpopo.

The schools were burnt down in what I am not sure I should call service-delivery protests.

A section of Malamulele High School was set alight on Monday. A school in Gikana village was torched on Tuesday, and a third was set alight at the nearby Xikunda village on Wednesday.

In Khakhanwa, police said five classrooms and the office of the principal were damaged in a fire on Wednesday. In Mohlakeng, on the West Rand, a library was torched in protests this week.

There was no library where I grew up. There is nothing I would have loved more than to have had access to a library when I was a child. Now people burn schools, books and libraries.

When I started this column I thought I wanted to ask the questions: What does it take for people to develop a sense of ownership? What does it take for people to differentiate between what is of benefit to them in the long term and what is a short-term gain? I started writing with the old expression "to shoot oneself in the foot" stuck in my head.

Is it worth flirting with this point: the people who burnt those schools, despite paying taxes such as VAT, just don't feel that they own them. They are alienated from their own structures.

I have no solutions to offer, no insights, just a sense of loss, pain and deep sadness.

Elijah Mhlanga, of the Education Department, said this week that it costs somewhere between R10-million and R20-million to build a school.

The cost of burning a school down is a 100 times more than that.

It robs children of a future.