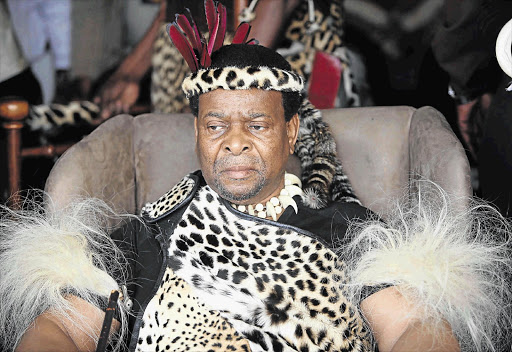 When King Goodwill Zwelithini made an impromptu visit to a Cape Town eatery this week‚ the restaurant manager had no idea it would create a social media backlash.

The Zulu king and his dinner party - accompanied by a large security detail‚ armoured cars and even a personal chef - descended on the Vasco da Gama Taverna at around 7pm on Saturday.

After the visit Cape Town writer Herman Lategan took to Facebook. He claimed that the royal party was escorted to the venue by a fleet of 4x4 Mercedes Benz vehicles that blocked off the street outside the restaurant from the top and bottom. The post also suggests that the vehicle’s lights were left on‚ “beaming and flashing”.

He went on to lament the king’s over the top security policies - guests were allegedly told “not to make eye contact” and the king’s bodyguards stood in the kitchen overseeing the food’s preparation along with a private chef who ensured that all meals met his very specific dietary requirements.

“The place was cleared out‚ all customers had to pay up and go‚ or move to a separate section‚ out of sight‚” the post reads.

Several Facebook users described the incident as “disgraceful” and one suggested that “there is no place for such grandiose behaviour anywhere on our planet”.

Restaurant manager Rosie Lemmer denied the allegations‚ saying that it was “terrible to hear” that guests had been offended by the king’s presence but that she and her staff had considered it “a very pleasant experience”.

The king's private chef accompanied him but she said he did not cause a disturbance in the kitchen.

“The King was a perfect gentleman‚” she said‚ adding that the bodyguards had not intimidated any of the guests‚ nor were guests asked to leave.

Lemmer also explained that the bill was surprisingly modest for such a wealthy party.

“I’m not sure why such a pleasant evening has caused such a stir‚” she said.

“Maybe they were offended that it was a Zulu King? They wouldn’t be so upset if it was the Queen of England!”