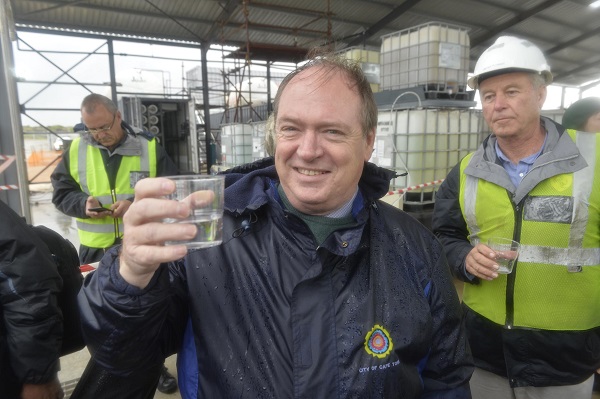 If you’ve turned on the tap in Cape Town in the past week or so‚ there’s a chance some sea water came out. Desalinated sea water‚ that is.

The desalinated water has cleared testing in laboratories‚ and was tested again on Monday when Cape Town deputy mayor Ian Neilson took a sip while on a site visit in Strandfontein on the Cape Flats. The city is satisfied with the quality‚ Neilson said while touring the plant in heavy rain‚ noting that it doesn't taste any different from bottled or tap water.

The Strandfontein plant is one of the temporary desalination facilities that the city hopes will augment the existing water supply. Neilson said the plant at the V&A Waterfront was currently producing water‚ but the city needed to get it up to quality standards before introducing it to the larger supply. A third desalination plant in Monwabisi is also expected to contribute seven million litres per day.

Once all functional‚ the three will still only account for a portion of the city’s supply.

“In the end it is only a contribution and we still wait for decent rains this year to ensure that our dams get to decent levels‚” Neilson said.

In Strandfontein‚ pipes stretch out from the shore into the sea and suck about 15 million litres of water daily into the plant‚ where pipes connect to large containers under a pavilion roof. There‚ the water is separated into brine and clean water through reverse osmosis. The brine is then dumped back out into the sea‚ where it disperses‚ while the water that remains behind is piped into the city’s water supply.

Neilson said he expected the city to build a permanent desalination plant in the future‚ but that it would take two to four years to become operational.

While the tender at the Strandfontein site is for just two years‚ Neilson said they would have the option to prolong it when the time came.

Desalinated water is the city’s second priority when it comes to augmentation‚ with more focus being poured into efforts to tap into groundwater.

While it doesn’t taste any different‚ desalinated water is more expensive than water from other sources. Water from Strandfontein costs R40/kilolitre‚ Neilson said‚ while water from the city’s dams costs about R5 for the same amount.

Despite the work on desalination plants and aquifer drilling‚ rainwater is still the most crucial component of the city’s system‚ Neilson said.

Capetonians continue to save water despite recent rain

“We cannot replicate that surface water system that took decades to build here‚” he said. “In the end augmentation schemes are contributions to assisting us through a drought period‚ and also as we get out of a drought period to ensure that we can supply more water than we otherwise would have been able to do.”

Neilson said the city’s aquifer projects on the Cape Flats had shown “reasonably good” results‚ but finding water sources that produced the right quality and quantity of water had proven a challenge. The process for augmenting the city’s water supply from new sources had taken longer than the city originally planned for‚ Neilson said.

“The original ideas about timeframes were unrealistic‚” he said. “We now have a far better grip on those timeframes.”

As for mayor Patricia de Lille‚ Neilson - the short-lived acting mayor - said: "We don’t really see much of each other."