Julius Malema continues to trend on Twitter with over 14,000 tweets (at the time of publishing this article) using the hashtag #Malema about the EFF leader discharging a "firearm" in East London.

Malema told TimesLIVE on Wednesday that it was not a real gun and no real bullets were shot.

"It’s not a firearm and no real bullets were shot. It was a simulation‚ part of our entire act of celebrating the 5th anniversary."

Video footage of the incident went viral with the police confirming they were investigating the incident. Afriforum also said it would lay criminal charges against the politician. 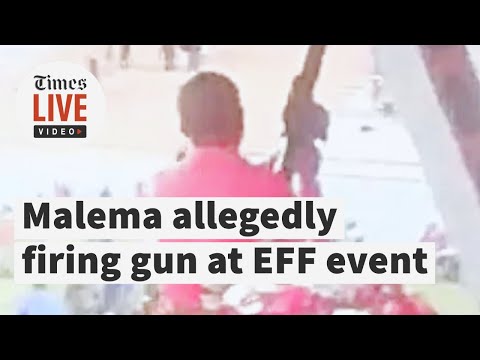 Firearms experts and gun experts told TimesLIVE that the claims Malema was firing blanks are false.

South Africans are divided on the issue with some calling on Malema to accept responsibility while others have said he has done nothing wrong.

It was a real gun.

I love you. I am sympathetic to your cause.

But Bob Marley told me
“Don’t let them fool you...”

What Julius Malema did was wrong. End of discussion. He must be humble and apologise. We love him so much, but we can't encourage such behaviour from a leader.

Julius Malema will help you see how many Empty tins we have in south Africa who defends such actions?

Julius Malema singlehandedly built EFF & he will take it down by himself. Imagine always supporting his petty cases in court, surely some around him are beginning to worry about his behavior.

Oscar fired shots in a restaurant the issue got brushed off julius malema fires shots in the air the whole country stops... Too much double standards we need to deal with real issues that help a country move forward

I was there at #EFF5thAnniversary That’s no rifle that CIC @Julius_S_Malema used. It didn’t even smoke But I must admit it sounded almost as good as the real thing, but it was a toy. pic.twitter.com/5s2SqTsrUs

Black First Land First (BLF) will open a case against the white man who handed Julius Malema the R5 rifle to fire in public at an Economic Freedom Fighters (EFF) gathering.#ArrestTheSettler

I see Julius Malema is taking this "Commander in Chief" role literally.

Ai socialists!! Life would be boring without them ka nnete.