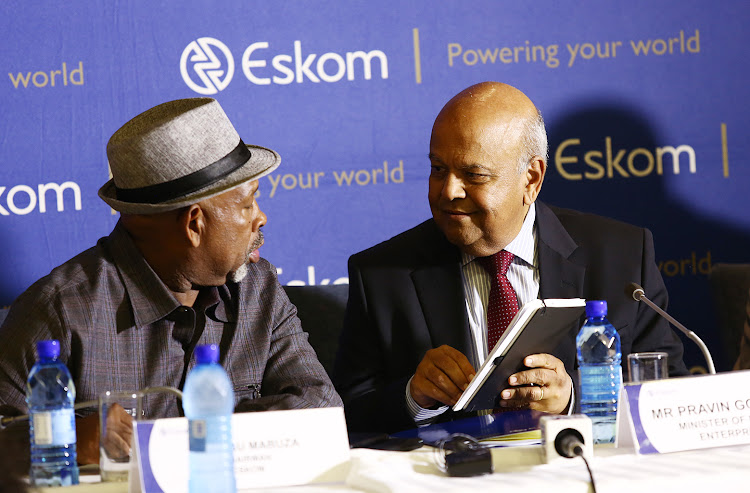 Eskom chairperson Jabu Mabuza talks to Minister of Public Enterprise Pravin Gordhan before a media briefing on December 6 2018 about the power outages that have hit the country.
Image: Masi Losi

All South Africans are responsible for power cuts, and it is a pain that the entire country has to bear.

"Either through our people or our government… but these are problems that we have all caused. There is a role that we all have to play; shareholders, providers of capital, staff, customers. This the choice of pain we need to take to going forward to try and put us back in a sustainable way," Mabuza said.

Mabuza, along with public enterprises minister Pravin Gordhan, Eskom CEO Phakamani Hadebe and other board members, was addressing the media in Johannesburg on the  affairs at the utility.

The briefing came as the country  faced more stage 2 power cuts. Locals and several business owners have lambasted the public utility for the power cuts.

The public enterprises minister says the president will soon announce a task team to create a plan for the next five years, to help turn Eskom around.
Politics
3 years ago

Mabuza said inadequate maintenance of power plants had added to the situation at Eskom.

"We did not maintain like we should have maintained. Like all mechanical stuff, if you don't maintain it, it is subject to wear and tear.

"When we did get the money, we, rightly and wrongly, decided that we are going to spend the money building a new plant,” he said.

He said that, regrettably, the new plant had not come "on stream on time and on budget".

Mabuza was not specific about which plant he was referring to. The Medupi and Kusile power plants have faced challenges in recent years.

"The plant that was supposed to retire, we had to go and pull out of mothball. We did not put the money to it as the plant we were building continued to absorb most of the resources," Mabuza said.

Gordhan said Eskom was working around the clock to prevent a dark Christmas.

He said that between December 15 and January 15, power cuts were not expected.

Gordhan said he had instructed the Eskom board to put together an action plan on a week-by-week basis.

"That plan must state very clearly who is taking responsibility, and what is expected in terms of assessing the key parts of the power station and where the weakness in this power station might be," he said.

He said investment for repairs at plants from 2010 onwards had been inadequate.

"Not enough money was put into the so-called big repairs themselves,” he said.

Other factors that might have played a role included the quality of maintenance at plants.

He said the instruction to Eskom was to get the power cuts out of the way as soon as possible.

From courts to parliament, load-shedding does not discriminate

Courts and parliament buildings are not excluded from SA's load-shedding woes, as was seen in the last two weeks.
News
3 years ago

We didn't ask for it but it's here.This is how you can survive the dark times during loadshedding.
News
3 years ago