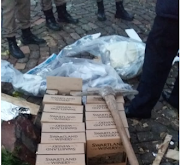 Image: SUPPLIED BY Hawks It was believed that the horns, which were stashed in wine crates, were destined for Malaysia.

The Hawks on Friday found rhino horns with an estimated value of R38m at a warehouse in Kempton Park, Ekurhuleni.

Gauteng Hawks spokesperson Captain Ndivhuwo Mulamu said the horns were stashed in wine crates. He said it was believed that the horns were destined for Malaysia. No arrests had been made.

Also on Friday, the wildlife authority SANParks said a former national parks ranger was one of two people who were arrested on suspicion of being on a rhino poaching mission.

The pair was arrested on Wednesday in the Tshokwane section of the Kruger National Park.

Three weeks ago, two suspects were nabbed during a sting operation with more than 167 rhino horns in the Hartbeespoort Dam area in North West.