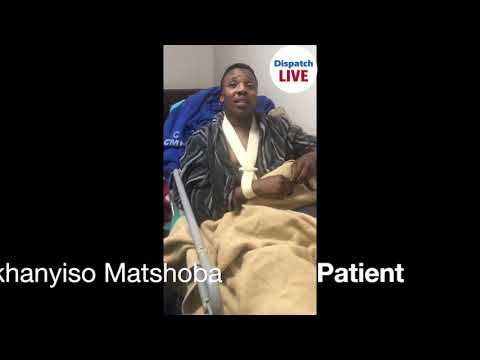 Twenty-six patients, many with broken or dislocated bones or flesh wounds, lie on the floor, on benches and on stretchers in Frere Hospital's corridor and waiting room.

They have waited desperately – for six days in one case – for a bed in the East London hospital's orthopaedic ward.

This harrowing scene was witnessed on Monday night by DispatchLIVE.

We slipped past security guards and saw the terrible line of patients waiting in conditions one of the wounded described as "like being in jail".

At least eight patients were lying on the cement floor or on hard wooden benches, insulated only by their own blankets.

Nogcinile Mbilini, 64, from Ngqamakhwe, who believed her knee was broken, was bent over in pain and holding an empty drip in her hand.

Battling to speak, she said: "I came here to get health, instead I am being slowly killed."

She was crammed together with male patients on the concrete floor.

She said she fell on her left knee cap, aggravating a 2005 car crash injury and was admitted on Monday.

Some of the injured on the floor had been provided with hospital-issue foam mattresses.

Six hospital stretchers on wheels were lined up against the wall in the corridor, waiting for a space in the ward.

Inside the orthopaedic ward we saw four doctors and three nurses hard at work treating patients, but not once during the hour spent there, did a nurse or doctor appear to check on the 27 patients outside the ward.

The waiting area was lined with benches.

However, he disputed that the patients were in pain, or were lying in a waiting area normally used by visitors.

Kupelo said: "We refute claims that patients are allowed to wait in the queue while in pain.

"There is an area within the casualty area where patients are seen by nurses and doctors while still waiting for bed availability in the ward."

He said nurses continued treating the injured outside the ward.

In a statement on Monday July 8, provincial transport spokesperson Unathi Binqose said 14 people had died on the first weekend of July on Eastern Cape roads.

He did not say how many had been injured.

Binqose attributed the crashes to large traffic volumes on July 7 due to the conclusion of the Makhanda National Arts Festival and reopening of schools for the third term.

Festival spokesperson Sascha Polkey said they had not heard of any festival-goer being injured on the way home.

In the waiting area, the Dispatch learned that many of the injured had been referred from other hospitals in far-flung areas including Komani and Ngqamakhwe.

Seven patients interviewed spoke of their pain, lack of care, suffering and fears.

Car crash patient Lukhanyiso Matshoba, 28, from Komani, said he was told he had broken vertebrae, an arm and both legs. He said he had been on the stretcher waiting to be admitted to the ward since last Tuesday.

He said he was number four in line for a bed and was told to wait for other patients to be discharged in order to get a bed in the ward.

He said he last took a bath earlier on the day of the accident on Tuesday, July 9.

"These conditions are worse than those of prisons; we stink here. This is jail," fumed Matshoba.

He said: " I was injured in a car accident on Tuesday and was transferred here from Komani.

"I have been waiting on this stretcher in this small area next to the other patients. I have seen patients admitted after me getting beds ahead of me. They were not as critical as me. I asked the nurses and doctors why I was being overlooked and I never got a clear answer."

Qhama Mdyogolo, 23, from Dimbaza, said: "I don't want to lose my arm. They are not changing the bandages so I changed it myself because once the infections spreads, that will mean they will have to cut off the arm.

"I have not received pills for pain since the morning. I am in pain."

Mdyogolo said he broke his left arm and severed veins in his right arm when he joined the community in rescuing neighbours trapped in their burning home.

Siphesande Siko, 31, from Keiskammahoek, said he was admitted four days ago.

Speaking from the wooden bench where he lay covered by a thin blanket, he said: "I was hacked with a bush knife during a fight."

Shaheeda Johannes of Pefferville said her 14-year-old son Shaidin who was admitted for a mysterious insect bite, had been sleeping on the bench at the entrance of the ward since Saturday as he awaited blood test results.

Johannes said she finally pleaded with doctors to allow her to take him home.

"They said they will make me sign a form stating that they won't be held liable should he die at home.

"How long does it take to get test results? I can't bear watching him sleeping on this bench. He has a comfortable bed at home."