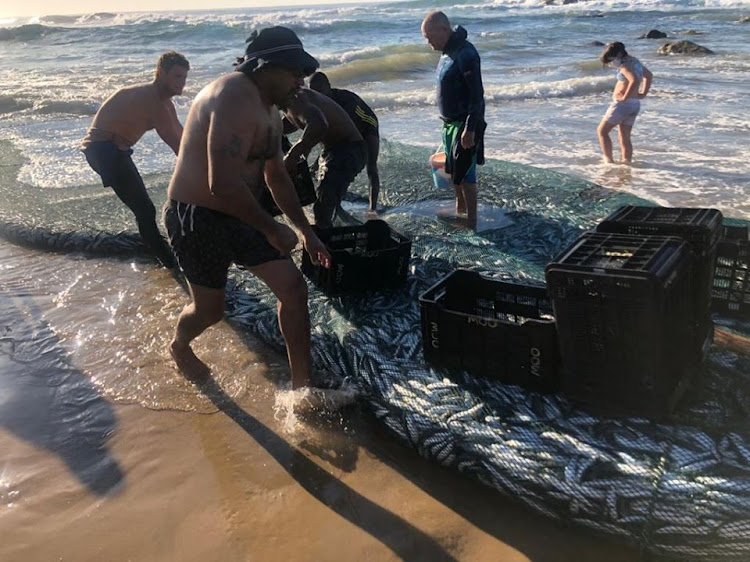 Thousands of sardines were netted on Ramsgate and Margate beaches on Monday morning.
Image: Mick Clarke via FB

Crates of sardines which were netted on the KwaZulu-Natal south coast beaches of Ramsgate and Margate on Monday are selling for between R1,000 and R1,500 each.

Scores of fishermen and fans of the silvery fish, which usually make an annual appearance around June on the south coast, rushed to the sea on Monday morning as conditions allowed for netting.

“Pilot shoals were spotted last week and they tried to net sardines on Saturday, but the seas were too rough. Today was the first official day of netting in KZN.”

He said fishermen had permits to net and many of them did so under the watchful eye of police at some of the beaches.

“As sardines have arrived and it's lockdown level 3, netters can operate if they have permits and will follow all procedures. The public needs to also follow the lockdown procedures and protocols. We know it's frustrating as it is a fun event for adults and kids, and a huge tourist attraction, but with the coronavirus we have to follow all procedures,” Hiramun said.

Lockdown has not stopped sardines from appearing in the Eastern Cape

The jury is still out on whether the much-anticipated sardine run will take place soon, although large shoals have been spotted along the Eastern ...
News
1 year ago