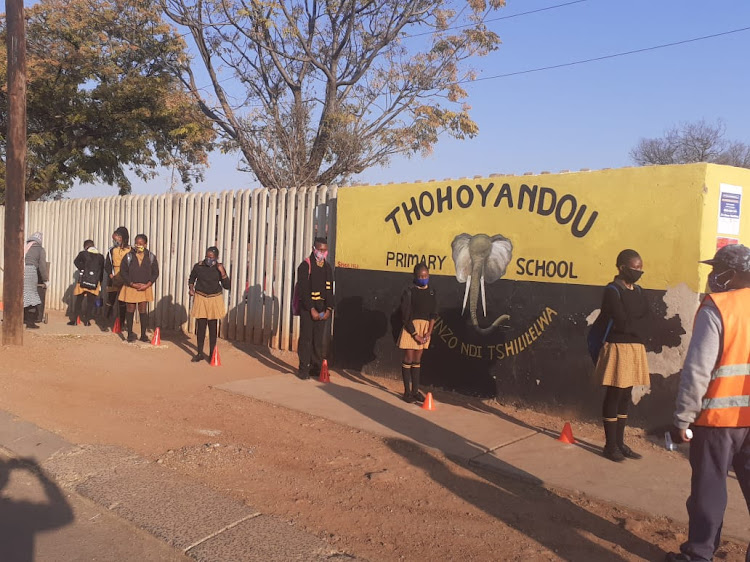 Masked grade 7 pupils at Thohoyandou Primary queue for their temperatures to be taken on their first day back at school.
Image: Shonisani Tshikalange

Three provinces have opted to halt the return to school of grade R pupils.

In KwaZulu-Natal the head of education department Dr Enock Nzama sent a circular to more than 6,000 schools on Thursday night informing them that grade R pupils should stay at home for now, reports SowetanLIVE.

This was followed by an announcement on Saturday that Limpopo will also delay the return of grade R pupils. Limpopo education MEC Polly Boshielo said after consultation with minister of basic education Angie Motshekga, they had reviewed the reopening date for grade R pupils in the province.

“The provincial department of education considered various aspects which have led to the new date for the return of grade R learners to be July 29. This arrangement does not hinder schools that had already applied and granted to reopen for different grades as per the regulations gazetted and published by the minister of basic education. These regulations allow both public and independent schools to apply for deviation,” Boshielo said.

She said the province was working in line with minister Motshekga's pronouncement that they will adjust the reopening phases based on the risk-adjusted strategy.

North West said it assessed its readiness and opted to halt the return of grade R pupils. North West MEC for education Mmaphefo Matsemela stressed that the aim was to avoid an influx of grades returning to school on Monday and to save lives.

“This is a safest approach as opposed to the inundation of all three grades at once. By so doing, we are continuing to save lives of our learners in adjusting to the new normal,” Matsemela said.

The government has decided not to allow all pupils who were scheduled to return to class next week to do so.
News
2 years ago

A Durban father filed an urgent application on Friday asking the high court to order the Durban North Primary School to allow his two children back ...
News
2 years ago

Why basic education minister made U-turn on return to class

The basic education department has admitted that it drastically cut the number of pupils returning to class tomorrow because the experience of the ...
News
2 years ago