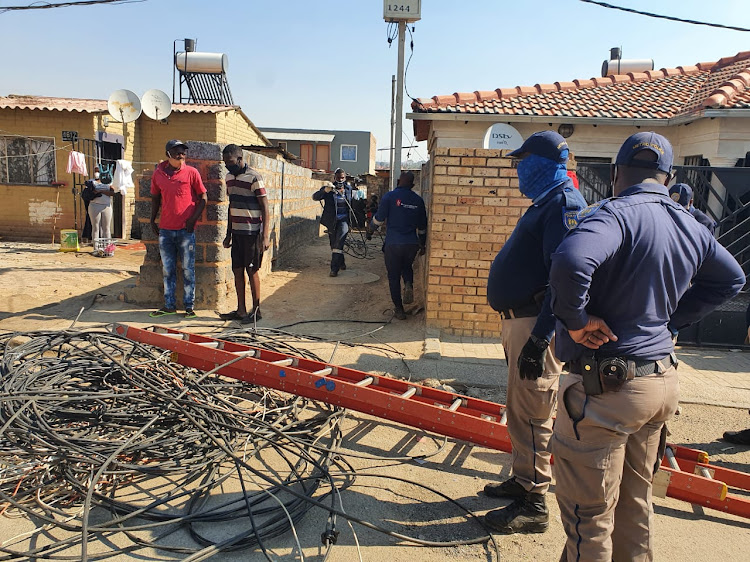 Eskom and City Power say they will continue to clamp down on illegal connections in Gauteng — whether they be in gated estates or informal settlements.

Eskom recently did an audit in the plush Waterfall Estate in Midrand where some residents had connected to the electricity network illegally.

Kotze said the audits were conducted based on low consumption on the meters. She said some property developers had connected to the network while the property was under construction and failed to follow the process to apply for temporary supplies.

Kotze said the customers were disconnected on the same day and remedial notices issued.

“Two such incidents were found on site. Revenue recovery is done on these accounts and the customers are billed for the lost consumption.”

Kotze said one customer who had illegally connected himself was billed R415,683 and fined R45,000.

Eskom is on track to split off its transmission arm and establish the new entity as a separate company within the next year.
Business Times
1 year ago

“Eskom is losing millions per year due to illegal connections to the network. We find that customers are prepared to pay someone to illegally connect them rather than to pay Eskom for the consumption,” Kotze said.

Isaac Mangena from City Power said the power utility was losing about R2bn in non-technical losses, which included illegal connections.

Mangena said this money lost could have been invested in infrastructure to ensure “sustainability in supply”.

“But because of these illegal connections, we are losing billions. You can imagine how serious it is. It inconveniences not only the residents, but also the businesses community.

“When we have illegal connections across the city, we get to a point where we have overloading of the network or breakdown of the infrastructure.”

Mangena said they had recently intensified the clampdown on illegal connections across the city.

He said the hotspots included informal settlements such as Alexandra and Rabie Ridge in Midrand.

During an operation in Rabie Ridge on December 17, Mangena said they recovered stolen cables used for illegal connections worth around R1.2m.

Other hotspot areas included informal settlements around Lenasia, Roodepoort and in the Johannesburg city centre.

“We are also seeing an increase of these illegal connections in the suburban areas.”

Mangena said at the time that millions in revenue were being lost at Dainfern extensions, Dainfern proper and Dainfern Ridge.

The highest single debt owing by one customer was R1.4m and the house was found with no meter, thus illegally connected, Mangena said.

“We will continue intensifying these operations to ensure that we deal with the problem of illegal connections because it affects City Power’s duty to provide electricity to the people of the City of Johannesburg.”

A solar-powered computer lab in the Overberg town of Barrydale has opened up new opportunities for learners and students who have little or no access ...
News
1 year ago

Eskom contractor ABB agrees to pay back R1.6bn for 'over-payments'

Construction company ABB has committed to pay back nearly R1.6bn to Eskom for "over-payments" made on contracts with the power utility.
News
1 year ago