Elizabeth and Philip spread their wings to the KZN south coast 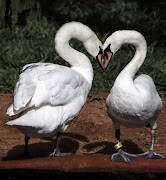 Image: Wynand Grobler The mute swan pair are the newest additions at Crocworld on the KZN south coast

Elizabeth and Philip — a pair of white, mute swans, a species protected in England under royal decree — have found a new home on the KwaZulu-Natal south coast.

The swans are the newest residents at the Crocworld Conservation Centre.

According to the centre, the iconic species, which were once a source of food for citizens in England, are protected under royal decree.

“In fact, the crown — currently Queen Elizabeth II — has owned all unmarked mute swans swimming in open waters since the 12th century.

“This has ensured the survival of the species, with an annual swan census taken to monitor their numbers.”

The centre says that while the British monarch would have to travel some way to see the swan pair at their new home, she would discover them living a protected and luxurious lifestyle equal to that of their royal counterparts.

In keeping with their regal nature, the pair have been appropriately named Elizabeth and Philip.

“We’re very excited about the arrival of the mute swans at Crocworld, and can’t wait for visitors to see them swimming contentedly within the Flamingo Wetland area,” said Ryne Ferguson, Crocworld Conservation Centre bird curator.

The almost three-year-old pair recently arrived from Umgeni River Bird Park, and will be joining a diverse array of local and exotic bird species found at the centre, including Eurasian eagle owls, Harris's hawk and jackal buzzards.